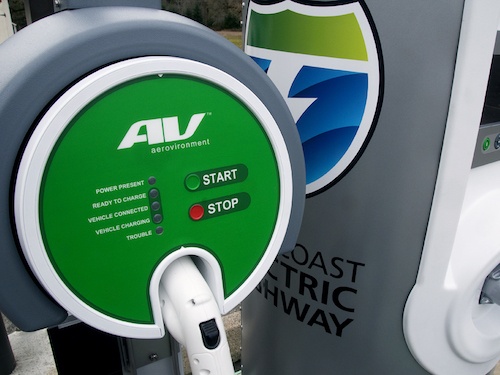 A company that was shut out of Ontario’s program to install high-speed electric vehicle charging stations along its major highways is surging back, announcing plans late last week to build the province’s first EV charger manufacturing plant in Markham.

The plant is expected to produce 40,000 chargers per year beginning in 2019 and create 100 jobs over the next three years, Autochargers.ca CEO Gleb Nikiforov told media at a ribbon-cutting ceremony Friday.

“It’s a very exciting moment today,” he said. “The electric car is here, and it’s here to stay.”

Autochargers will build its manufacturing capacity in partnership with San Carlos, CA-based eMotorWerks, a charging station provider owned by Italy’s Enel. The plant will start out using parts from California, but will gradually build up a Canadian supply chain, CBC reports. Nikiforov said the company chose to locate in Markham because of its skilled work force and proximity to Toronto.

“It really speaks to what’s happening to the economy,” Mayor Frank Scarpitti told the ribbon-cutting. “The only way we are really going to change the world out there is by making it easier for the consumer to be able to buy electric vehicles and be sure they can charge them wherever they go.”

The tone was decidedly different last month, when a Toronto Sun investigation revealed serious flaws in Ontario’s $20-million plan to install 500 public charging stations in key locations across the province. In the final analysis, the most likely problem was that government officials ran a standard procurement process and selected the low bidder—only to find that that bidder was having trouble delivering.

“We were extremely disappointed,” Nikiforov said at the time. “The province could have had the best equipment, backed up by the best companies in the market,” and in the end, going with the cheapest bidder may have been a serious error. “I think (the government’s contractor) went full throttle on it and promised too much, the Ministry believed them, and they didn’t fulfill their promise,” he told the Sun.

Late last week, Economic Development Minister Steven Del Duca called the new plant good news for Ontario. “This new facility will serve as a catalyst for new opportunities and new careers throughout Ontario, and we’re very excited to welcome the new facility and watch its growth in Ontario and beyond,” he said in a release.