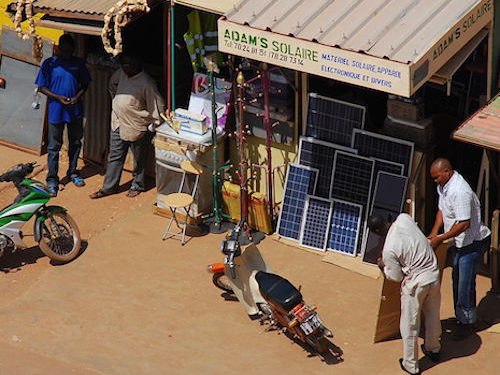 Two of the world’s biggest credit card companies are amping up their renewable energy footprints, with Mastercard offering a cheap solar payments option for 625 million people in sub-Saharan Africa with no access to the grid, and Visa promising to convert its global operations to 100% renewables by the end of 2019.

During the Mobile World Congress late last month in Barcelona, Mastercard announced a partnership with M-KOPA, a Kenyan company that supplies solar electricity to three million people. The system will allow M-KOPA customers to make small, daily payments on home solar systems by scanning a QR code from a smart phone, or entering a merchant ID into a feature phone, PC World notes.

Matt Miller, vice president of new product development for Mastercard’s commerce device team, said the system is intended to make solar a realistic option for households that currently rely on charcoal and kerosene for energy. The payment giant’s Masterpass Quick Response (QR) technology “is currently available in Ghana, Kenya, Nigeria, Rwanda, Tanzania, and Uganda and supported by a network of mobile network operators and banks,” PC Magazine writes, “but this marks the first extension of the payments tech into solar.”

“We’re making sure solar payments are easy and seamless and can be explored in many different markets, especially those that are off the grid without access to traditional electricity,” Miller said. “They can procure the panel and pay for it over time without a banking relationship. The Masterpass QR framework allows customers across the globe to participate, and with a technical interface that can be used with everything from a smart phone to a feature phone.”

Visa unveiled its in-house procurement target late last month and announced it was joining the RE100, a global campaign launched in 2014 by The Climate Group and CDP, formerly the Climate Disclosure Project. “We are proud to play a role in driving the adoption of renewable energy,” said VISA CEO Al Kelly. “This announcement is an example of our longstanding commitment to operate as a responsible, ethical and sustainable company, while fostering economic growth.”

Visa “is undertaking a range of initiatives to boost its environmental credentials,” CNBC reports. “These include a composting and recycling program and the use of efficient lighting. The business is also trying to mitigate its transportation impact through the use of public transport subsidies, employee shuttles, and virtual meetings.”