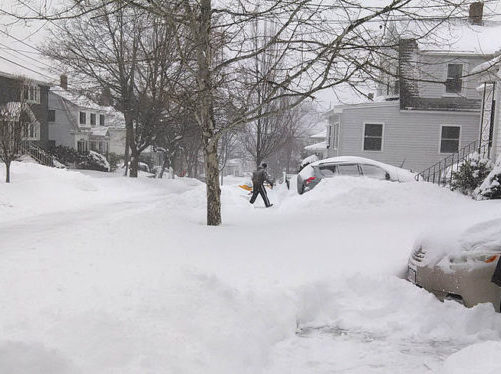 Recent and devastating cold snaps in Florida, along with monster “thunder-snow” storms in the northeastern United States, may well be directly linked to shockingly high and rising temperatures in the Arctic, according to a new study in the journal Nature.

“The Arctic has just experienced its toastiest winter on record, with parts of the region 20°C (68°F) warmer than the long-term average,” The Guardian reports, “a situation scientists have variously described as ‘crazy,’ ‘weird,’ and ‘simply shocking’.”

The new research compared daily Arctic temperatures since the 1950s with data from the accumulated winter season severity index, which grades winter weather in representative cities across the U.S. based on temperature, snowfall, and snow depth. It found that periods of extreme cold, especially on the eastern seaboard, are “up to four times more likely when temperatures in the Arctic are unusually high.”

“It’s a complex story,” he acknowledged. “Global warming is contributing to milder temperatures, but is also having unforeseen consequences such as this.”

Such unforeseen consequences include a recent spate of manatee deaths off the coast of Florida. “So far this year, 166 of the marine mammals have been found dead off the state’s coast,” The Guardian notes, “with stress from the cold the leading cause of mortality.”

The U.S. has hardly been alone in the wave of weirdly cold weather. While schools closed in New York City, bitterly cold winds from Siberia “dubbed the “beast from the east” howled across Europe, dumping snow and stranding motorists, and killing several UK residents.

While the AER research did not set out to establish the mechanism behind the correlation between a warming Arctic and a shivering northern hemisphere, Cohen said the findings were “consistent with the theory that the polar vortex—which shot to public consciousness during a 2014 cold spell—is being disrupted as the Earth heats up.”

Other scientists, like Penn State climate specialist Richard Alley, are uncomfortable invoking the vortex, noting that “the discrepancy between Arctic temperatures and winter weather elsewhere could have other drivers, such as a warm Gulf of Mexico feeding extra energy into storms along the U.S. east coast.”

“The broadest picture is that we are indeed warming the world’s climate,” he said, “and this will impact us and other living things.”