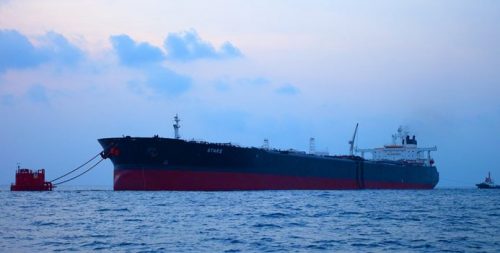 Canadians hoping Alberta’s oil exports from its tar and oil sands will expand may be disappointed. One supertanker port has turned the economics upside down.

She was bound for China, and her maiden voyage signals a major shift in global oil shipping patterns, economics, and the highly competitive oil refinery business.

The LOOP terminal is deep in the Mississippi Delta. A 29-kilometre pipeline stretches across the shallow Gulf of Mexico coastal shelf to a point deep enough to allow similar Very Large Crude Carriers (VLCCs) to unload their vast tonnages. Nearby a complex of salt caverns and surface tanks stores both oil imports headed for US refineries and fast-increasing volumes of oil bound for export.

Two cargoes at once

Any VLCC from any country can now unload or load oil at the LOOP. They can carry it – two million barrels at a time – to ports across the globe, at a price lower than smaller tankers.

And because the LOOP bi-directional pipeline can pump oil at a mind-bending 100,000 barrels an hour, supertankers can arrive with one load for refining and sail with another, barely dropping anchor.

That will probably prove fatal to the plans of the Canadian province of Alberta to expand unrefined bitumen exports by either the proposed Trans-Mountain pipeline to the British Columbia coast or the planned Keystone XL pipeline to Texas.

Bitumen, or asphalt, is the feedstock which tar sands and oil sands producers remove from the ground, thick enough to require mining, not pumping. It then has to be diluted with light crude oil or other chemicals before it can go through a pipeline (hence the term diluted bitumen).

• Potential foreign refiners and customers will demand that future oil price, quality, shipping costs, and delivery speeds match those that LOOP can offer;

• For safety reasons, the maximum oil tanker cargo allowed into British Columbia’s ports is an Aframax class ship, at 80% capacity, carrying 550,000 barrels – only about a quarter of the load of a VLCC. So a refiner in Asia would need to charter four tankers to ship the same amount as from the LOOP terminal, then wait longer for the full order to arrive;

• The diluted bitumen Alberta wants to export has chemical and combustion properties that make it far inferior to the higher-quality oil the LOOP has access to from US formations in the Dakotas and Texas, or OPEC countries, or the North Sea. Tar sands/oil sands bitumen can be upgraded and refined, but that adds significant costs and requires dedicated facilities.

• The terminus of the Keystone XL will be refineries on the Texas Gulf Coast near Houston which are not connected to the LOOP. Even if future Alberta bitumen were to be refined there, it would take three fully-loaded Aframax tankers leaving Texas for ship-to-ship transfers to each VLCC.

These important changes in tanker and terminal technology and scale are no secret in the oil industry outside Canada. Nor is the dirty chemical composition of tar sands/oil sands bitumen. Nor is the cutthroat competition among global oil producers, refiners, shippers, and speculators, in which nickels per barrel of oil delivered are fought over fiercely.

In fact, the bad news for Alberta’s oil patch has been building up for a decade. That’s when shipbuilders in South Korea, China and Japan began constructing what has become a global fleet of about 750 VLCCs (with 50 more ordered for 2018), and the scrapping of Aframax class tankers began accelerating.

When the undeniably dirty content of Alberta’s bitumen deposits is added into these negative cost equations, global oil players know when to quit.

For environmentalists and climate scientists, the chemical composition of Alberta bitumen is cause for deep worry about toxic air emissions, potential spills into waterways and aquifers, and further destabilisation of the climate. Together with First Nations, they have vowed to fight long and hard for ecological reasons.

But for potential foreign purchasers of that oil, the key question is how much extra it will cost to extract the dirty compounds in Alberta bitumen so that its quality matches export oil being produced at high-grade, low-cost US shale formations like the Bakken, Permian, and Eagle Ford.

No refiners will pay the same price to process sweet light crude and bitumen because they have to make costly capital outlays to configure their refineries to extract higher sulphur and heavy metals, make up the hydrogen deficit of bitumen, then dispose of the mountains of carbonised crud (petcoke) left over. So refiners – anywhere on the planet – will charge Alberta producers more to process each barrel of bitumen.

Alberta’s huge deposits cost too much to dig up, refine, and ship. They are in the wrong place. And they rank among the dirtiest to refine into gasoline, aviation fuel, or home heating oil.

These are the reasons – hiding in plain sight – why western Canada bitumen fetches a lower price than oil shipped from Texas and the North Sea. The LOOP terminal will magnify that spread.

Such details are apparently irrelevant to Alberta premier Rachel Notley and her federal tar sands/oil sands ally, prime minister Justin Trudeau. Instead, they support almost doubling oil production (causing GHGs to rise from 70 to 100 megatonnes per year) – roughly equal to the annual greenhouse gas emissions from all the cars, trucks, buses and boats currently used by 14 million people in Ontario.

About 20 months ago, many of the Big Oil players began to cut their losses and quietly stampede away from Alberta’s oil. Many bought into US shale oil plays.

Then Washington repealed a 40-year ban on the export of oil drilled by producers within the US. Suddenly, Americans could sell to Asia and Europe. Countless more shale wells were drilled, American pipelines began filling to capacity, and high-quality crude began flowing faster to refineries on the Gulf Coast.

By the end of 2017 US oil production was at an historic high, vast tank farms were full, and even major OPEC countries – reeling from the tsunami of oil coming from their new American competitor – tried to shore up world prices by cutting production and selling premium blends at deeply discounted prices to Asian and US customers.

Some buyers are storing high-quality, low-cost oil in VLCCs hunkered down in harbours across the globe. (That fleet of 750 supertankers could collectively store some 1.5 billion barrels of oil at any given time.)

Some American shale oil producers, who can drill deposits quickly and cheaply and then tap or cap them depending on the transient price of oil, can survive at US$20 a barrel. Most producers need $40 to justify pumping and selling for a profit. Alberta’s proposed new projects may need $80 to 100 per barrel to permit such huge capital investments. That is nowhere on the horizon.

By contrast, a minor swing in oil prices can cause a VLCC to change course mid-ocean and head for a new customer offering a better price. How could a new tar sands/oil sands project be bankrolled when such price volatility is the new normal, and decades-long contracts are ancient history? It couldn’t.

There is no business case for an expansion of Alberta’s tar sands/oil sands on the scale needed to justify the Keystone XL and Trans-Mountain export pipelines because of one bare fact: there are zero foreign buyers who today will commit to decades-long purchase contracts for unrefined bitumen at a fixed price near US$80 per barrel.

Instead, global traders will literally buy future oil by the boatload, then book terminal time at any deepwater ocean port like the LOOP, anywhere in the world, to embark with two million barrels in a single cargo. – Climate News Network

Originally published exclusively on The Energy Mix, and republished by permission. The Mix is a thrice-weekly e-digest on climate, energy and post-carbon solutions.

Paul McKay – paul@paulmckay.com – is an award-winning investigative reporter and author. His reports have appeared in the Ottawa Citizen, Toronto Star, Globe and Mail, and Vancouver Sun.