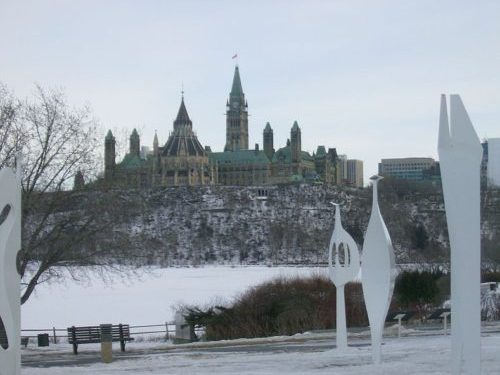 Ottawa is one of 13 cities around the world that could see warming above 2.0°C in the next decade, according to an analysis released during last week’s IPCC Cities and Climate Science conference in Edmonton.

The 833-page report lays out high- and low-range temperature increases for 100 cities, predicting that they’ll all face average warming of at least 1.0°C compared to 1971-2000. It calls for a comprehensive program of greenhouse gas reductions combined with climate adaptation, disaster risk assessment and reduction, engagement with “the full range of stakeholders and scientists”, attending to the needs of “the most disadvantaged and vulnerable citizens”, and efforts to bolster cities’ creditworthiness to give them the wherewithal to climate solutions.

“A final word on urgency,” the report warns. “Cities need to start immediately to develop and implement climate action. The world is entering into the greatest period of urbanization in human history, as well as a period of rapidly changing climate. Getting started now will help avoid locking in counterproductive, long-lived investments and infrastructure systems and ensure cities’ potential for the transformation necessary to lead on climate change.”

Co-editor Cynthia Rosenzweig, head of the climate impacts group at NASA’s Goddard Institute for Space Studies, said the report provided “foundation knowledge” for cities to rein in the impacts of climate change. “How will the cities know how they should develop their resilience plans unless they know what temperature projections, how the climate is supposed to change in their cities?” she said.

“The cities in the higher latitudes really are on the front lines of the warming,” Rosenzweig added. And “the less action is taken to reduce greenhouse gas emissions, the more likely it is that cities will see temperatures hit the predicted maximums,” CBC reports.

CBC’s local coverage of the report notes that Ottawa residents “can expect to skate less, drive over more potholes, and even fall more on slippery streets” as local temperatures rise and weather patterns shift. University of Ottawa climate specialist Paul Beckwith pointed to this year’s unusually warm February as evidence the city is already seeing the effects that UCCRN predicts.

Daniel Scott, director of the University of Waterloo’s Interdisciplinary Centre on Climate Change, recalled participating in a 2005 National Capital Commission study on the impacts of climate change on recreation and tourism. It assumed lower temperatures over the next decade than the UCCRN study now suggests.

“We had looked at scenarios that would have had that amount of warming, but it wouldn’t have been until the 2040s or 2050s,” he told CBC.

Councillor David Chernushenko, chair of Ottawa’s environment and climate change committee, dissembled when CBC asked whether the city is doing enough to respond to climate change. “Nobody, anywhere is doing anywhere close to enough,” he said, explaining that politicians won’t vote the funds for quick action until their constituents begin experiencing climate impacts first hand.

“Until you see every country and every other city doing it, you start to feel like, well, why would I be investing that kind of money?” he said. “Yet that’s where we have to get to.”

While Ottawa’s mayor and council majority dither on anything resembling a coherent climate and energy plan, CBC reported last week that Calgary has come up with more than 1,000 actions to build resilience, rethinking everything from the way it builds roads to the tree species it chooses to plant.