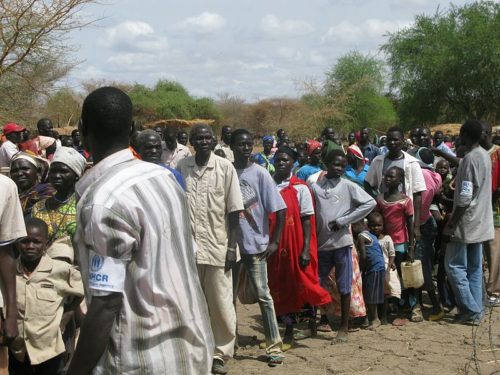 A brutal, five-year civil war that began just two years after South Sudan declared its independence is being funded by oil revenue, according to a new report last week from The Sentry, an investigative initiative co-founded by U.S. actor George Clooney.

“Impoverished South Sudan is rich in natural resources, and oil revenue is the country’s main hard currency export income,” Oilprice.com reports, so “it’s not a leap to suggest that oil revenues are funding its side of the war.” But The Sentry “is claiming that it is this very oil money that South Sudan’s leaders are using to get rich and terrorize civilians.”

“Little has been known about the financial machinery that makes South Sudan’s continuing war possible, but these documents appear to shed new light on how the country’s main revenue source—oil—is used to fuel militias and ongoing atrocities, and how a small clique continues to get richer while the majority of South Sudanese suffer or flee their homeland,” the report states.

Presidential spokesperson Ateny Wek Ateny dismissed the report, telling Reuters that “the oil money did not even…buy a knife. It is being used for paying the salaries of the civil servants.” Oil Minister Ezekiel Lol Gatkuoth, who hopes to see the country double its oil production over the next year from today’s 135,000 barrels per day, said “80% of the country is peaceful”, and “you can even party during the night” in the capital city, Juba.

The Sentry report paints a very different picture, citing documents showing that state oil company Nile Petroleum Corporation (Nilepet) “helped fund militias responsible for horrific acts of violence. They also indicate that millions of dollars were paid to several companies partially owned by family members of top officials responsible for funding government-aligned militia or military commanders.” The documents also “appear to describe how the petroleum ministry provided support to these militias in the form of fuel, equipment, funds, food and supplies, and airtime for satellite phones.”

“I’ve never seen a political elite with so little interest in the well-being of its own people,” said UN Secretary General António Guterres. Since 2013, Oilprice states, 2.4 million South Sudanese have left the country, 1.9 million are internally displaced, and 1.5 million are on the brink of famine.

Last week’s report is a follow-up to a Sentry exposé in September 2016 that was based on two years of undercover investigation and forensic accounting. “Unfortunately, in the last five years, South Sudan’s leaders have engaged in much of the same behaviour, including mass atrocities on its citizens, starvation, and rape. All while plundering the state’s resources and enriching themselves and their families,” Clooney told media at the time.