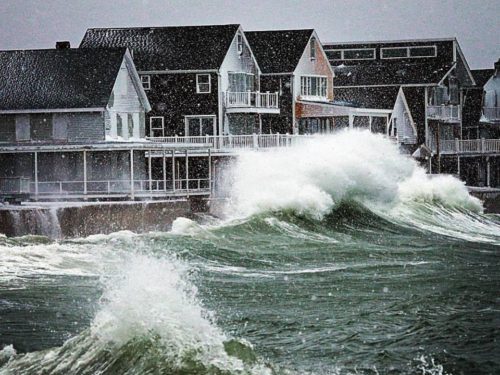 Now that Boston has faced two “hundred-year storms” in a matter of weeks, the city may be about to pick up the pace on a coastal climate adaptation plan that has so far existed more in theory than in practice.

“Impacts from climate change, which were supposed to wallop the area 80 years from now, are already menacing a region that is only beginning to talk about ways to protect itself,” the Washington Post reports. When a second severe storm hit the city’s commercial-residential shoreline earlier this month, “it left little doubt to some that near-hurricane-force winds that drive freezing floodwaters into business districts and neighbourhoods are becoming a new normal for which the city and its surrounding area are not prepared.”

City and state officials and community and business leaders are looking at various strategies to protect the famously low-lying area. “The big questions are how we get organized to implement this, and how we pay for it,” said Kathy Abbott, president and CEO of Boston Harbor Now, who sits on the city’s Green Ribbon Commission to develop climate adaptation strategies. “Now that we’re having these hundred-year storms every two months,” she told the Post, “it’s providing a sense of urgency without a [Hurricane] Sandy or another horrible storm.”

But the city’s planning practices haven’t caught up yet, and protections implemented by developers are voluntary, not mandated. “Despite the risks, Boston approved a 1.3-million-square-foot mixed-use development in one of its most vulnerable areas, the tony Back Bay, where three feet of sea-level rise—one of the more conservative estimates for the amount of water that will creep in in the next 40 to 100 years—will drown homes and hotel entrances along the harbour,” the Post notes. “The billion-dollar project will top and surround one of the city’s busiest commuter stations.”

Deanna Moran, director of environmental planning at Boston’s Conservation Law Foundation, said responsibility for the planning gap is shared. “It’s not the just city or state leadership, we also need leadership from developers,” she said.

“Some of the easiest things we can do is leverage the system we already have,” she explained, with measures like including lush gardens in new developments that will pull floodwaters into the soil. “We operate under the notion of sea walls and hardening surfaces, but there’s nothing we can do to completely keep the water out. We have to adapt to let the water in when we have storms like this.”