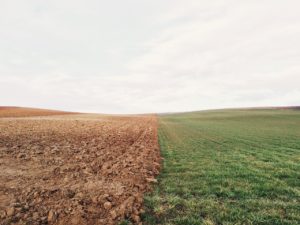 Farmers worried about the economic toll of topsoil loss and declining fertility are finding common cause with ecologists anxious to reduce sediment load and pollution levels in a Minnesota watershed, reports the West Central Tribune.

When the Hawk Creek Watershed Project and the Renville [Minnesota] County Soil and Water Conservation District recently invited Jodi DeJong-Hughes of the University of Minnesota to a meeting to discuss her research on soil erosion in the area, more than 100 farmers attended. And what they learned was a sharp shock to the wallet.

“Poking around road ditches at eight locations around the region,” the Tribune reports, DeJong-Hughes discovered that, “on average, a ditch acre held nine tons of topsoil”, each of which represented “$50.84 worth of lost nutrients blown from farm fields.” Crucial to keeping that soil out of the ditch and dollars in the bank is the practice of reducing tillage and planting cover crops, said six area farmers.

Although economics was the original driver for Dave Wordes, the practice of minimizing soil disturbance throughout the harvest cycle also improved soil health and cut down on the need for expensive fertilizers. “I’ve seen the benefits that Jodi is talking about,” he said. “It’s amazing when you get underground and see what’s happening.”

Those changes, said DeJong-Hughes, are pretty striking: “The difference between reduced tillage and aggressive tillage in terms of what happens to the soil is like that between a sponge and a brick.”

But there’s also “a difference not seen,” the Tribune notes, citing a 2014 study from the University of Nottingham. “Soil tillage practices have a profound influence on the physical properties of soil and the greenhouse gas (GHG) balance.”

DeJong-Hughes acknowledged that implementing the new practices will be challenging: “There is no cookie-cutter way of doing this,” she told meeting participants, and “practical, first-hand information” is hard to come by.

But the economic and environmental benefits are clear, and Dean Dambroten, a local farmer who is also a technician with the Hawk Creek project, said he had high hopes “to start an informal network of farmers in the area who could meet, share their experiences, and help each other.”