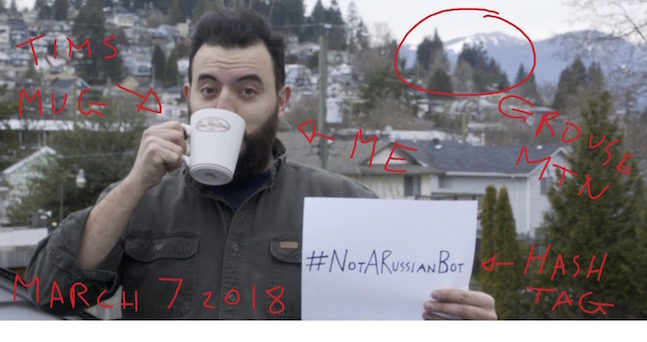 Unless you’ve been standing against Kinder Morgan’s Trans Mountain pipeline expansion as an agent of the Russian government (or as a bot deployed by a Russian troll farm), you might have a few choice words for Alberta opposition leader Jason Kenney.

During a week in which the Trans Mountain debate went from intense to ridiculous, Kenney raised the old, false accusation that pipeline protesters fighting to protect Indigenous rights, iconic waterways, and endangered species are actually agents of foreign powers bent on undermining Canada’s fossil industry. CBC responded with a long post that gave lots of play to wild claims that Kenney admitted were unsubstantiated.

“In whose interest is it that Canadian oil and gas does not get to global markets? Well, obviously, it’s in the interest of Russia, with the fourth-largest reserves on earth,” Kenney said Monday, during a stop in Vancouver. “If the Russian government decided to deploy an organized social media campaign to attack U.S. energy, so there’s less American energy exports, it’s entirely reasonable to assume they might have tried to do the same thing in Canada.”

“I have no evidence of that, but it’s a reasonable question.”

“The reality is there are thousands and thousands of British Columbians, who independent of any environmental campaign, feel strongly about the place where they live and are going to speak up and put pressure on their lawmakers,” responded the Dogwood Initiative’s Kai Nagata. “You could cut off all sources of out-of-province funding for environmental campaigns, and that wouldn’t change the scale of public opposition to Kinder Morgan.”

Dogwood was out yesterday with an impromptu selfie campaign, urging supporters to send photos to Kenney to reassure him that they aren’t Russian bots.

“It’s time to fess up,” Nagata wrote. “Are you being paid by Vladimir Putin?”

“The question is laughable, but it shows how unhinged the debate has become around oil tankers on the B.C. coast. ‘I don’t have any evidence,’ Kenney admitted to the reporter. But like Donald Trump, what comes out of his mouth becomes news.”

Somewhat more hinged was a panel discussion at the University of Ottawa Tuesday, when Bill Nye the Science Guy challenged Prime Minister Justin Trudeau on his government’s support for Trans Mountain.

“Tell us about the Kinder Morgan pipeline,” Nye asked the PM, citing a study that showed how Canada could drop all fossil fuels by embracing renewables.

“We are going to have a transition phase while we develop alternatives to fossil fuels,” Trudeau replied. “So while we are developing those alternatives…we still need to be able to power our homes, our cars, our economy.”

Nye applauded Canada’s recent investments in scientific research, and accepted Trudeau’s rationale on Kinder Morgan, The Canadian Press reports. “It’s your country, Canada’s going to do what it’s going to do,” he said. “And the prime minister had a very well-thought-out answer that it’s for economic development in the short term.”

Later, he told reporters that “the pipeline is, in the big picture, bad. But in the short term, what are you going to do?” CP also noted Nye’s reference to the Alberta “tar” sands, a term despised by the province’s fossil industry [even though the industry itself made it up—Ed.]

“I’m charmed by the term ‘oilsand’,” he said. “But, everybody, it’s tar. That’s what it is. You have to use almost a third of the energy in the tar to make synthetic crude oil.”

None of that was enough balance for Kenney, who took to social media to critique Nye’s comments. “Today a millionaire American celebrity joined our prime minister to attack Alberta’s oilsands,” he tweeted. “Bill Nye has no business attacking Alberta’s ethical oil & gas industry—and the hundreds of thousands of Albertans that depend on the sector for their livelihood.”

A day later, Finance Minister Bill Morneau responded with the assurance that the Trudeau government “is waging a ‘behind-the-scenes’ campaign to make sure Kinder Morgan Inc.’s expansion of the Trans Mountain pipeline goes ahead,” CP reports.

“The entire government is working to help reach an agreement that would mitigate British Columbia’s objections to the expansion, Morneau said. He declined to provide details of those efforts or a timeline for when they may produce results.”