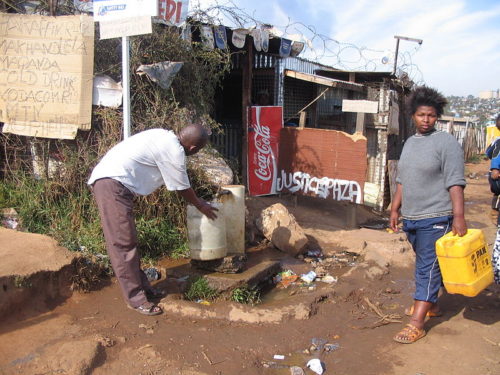 Residents of Cape Town, South Africa may have postponed the prospect of their city running out of water after a sustained, three-year drought, but officials are warning people to keep their consumption down to prevent the dreaded Day Zero from hitting in 2019.

The city’s taps were on track to run dry April 22, but the community dodged that bullet by cutting its water use in half, after officials capped per capita consumption at 13 gallons per day—a fraction of the 100 gallons the average American consumes each day, Grist reports. “Capetonians flushed their toilets less, took infrequent showers, and recycled wastewater.”

Now, the city is warning people not to get complacent. “While we are feeling more confident of avoiding Day Zero this year, we cannot predict the volume of rainfall still to come,” said Executive Deputy Mayor Ian Neilson. “If winter rainfall this year is as low as last year, or even lower, we are still in danger of reaching Day Zero early next year.”

The unwanted milestone is now predicted for August 27. Since “this date falls deep within the normal rainfall period, it is no longer appropriate to project the date without any consideration of rainfall,” the city announced Wednesday. But “if winter rainfall this year is as low as last year, or even lower, we are still in danger of reaching Day Zero early next year,” Neilson said.

Mmusi Maimane, leader of South Africa’s opposition Democratic Alliance, said the city’s current consumption of 510 to 520 million litres per day “is far short of what we are accustomed to in the city of Cape Town, but I think it’s admirable for people who have put in efforts.”