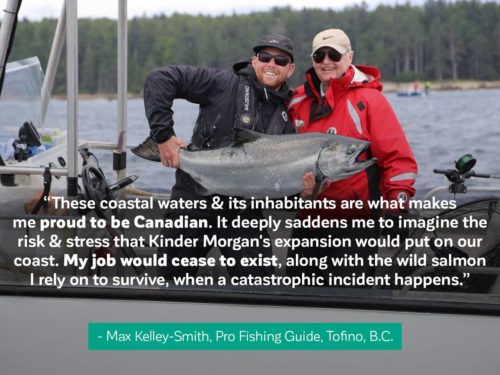 For all that Alberta is touting Kinder Morgan’s Trans Mountain pipeline expansion as a job creator, British Columbia’s Dogwood Initiative is out with a series of snapshots of the people whose jobs will be at risk if the project is completed.

“Up and down the West Coast, people make a living and feed their families in sustainable fisheries and tourism industries,” writes campaigner Sophie Harrison. “These jobs could be wiped out in the event of a single oil tanker accident in the Salish Sea. That’s what Premier [John] Horgan is talking about when he promises to defend the B.C. economy from Kinder Morgan’s expansion.”

Harrison says she was inspired by the British Columbians who signed on to the #KeepCanadaWorking hashtag with stories about the risks they foresee in the Houston-based pipeliner’s plan to increase dilbit tanker traffic on the coast.

“There are 40 people working for small oyster producers on this dock alone,” wrote Ryan Maliszewski and Jennifer Lee of Fanny Bay, B.C. “More in other places in Baynes Sound. We all depend upon this work to feed our families. Kinder Morgan puts my job at risk.”

“If the proposed pipeline goes ahead, it will directly impact the Southern Resident orcas’ critical feeding area, likely leading to their extinction,” added Mark Williams, a wildlife and whale-watching guide in Victoria. “There are currently only 76 southern resident killer whales left in the world. This is not what they need.”

“In 2015, B.C. brought in approximately C$15.7 billion in consumer spending from tourists,” said Vancouver small business owner Kenton Duncan. “As we rush to make choices that could alter the shape of the economy, let’s not only look at what we could gain, but rather what we could lose.”

There are several more memes on the Dogwood site.