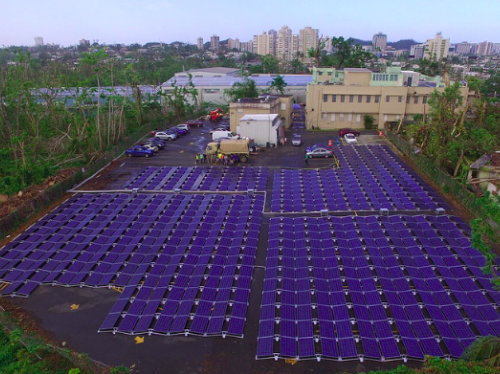 Renewable energy could supply 40% of Puerto Rico’s electricity in 2028, 50% in 2035, and 100% by 2050, according to a study released last week by the Institute for Energy Economics and Financial Analysis and Puerto Rico’s Institute of Competitiveness and Sustainable Economy (ICSE-PR), but only with the right regulatory structures in place.

The report “emphasizes the importance of proper political oversight over the Puerto Rico Electric Power Authority, which has been plagued for years by difficulties and which stumbled badly in the aftermath last year of Hurricane Maria,” IEEFA notes in a release.

The report recommends that Puerto Rico prioritize “a resilient approach towards the development of renewable energy, demand response, and energy efficiency” in place of traditional fossil fuel infrastructure, retire its “old, inefficient oil-fired units”, and partially replace them with “more flexible and efficient units that can facilitate the integration of renewable energy into the grid.” But it stresses that a successful transition will hinge on “strong, independent regulation” by the Puerto Rico Energy Commission.

“The transformation of the Puerto Rico energy system requires not only physical changes to generation, transmission, and distribution, but strong regulation to ensure successful implementation,” said ICSE-PR Executive Director Tomás J. Torres. That central authority is needed “to implement a comprehensive planning process and provide certainty to consumers and investors as the energy system is modernized.”

“This paper prioritizes the growth of renewables and distributed energy in a grid rebuild across Puerto Rico that would be complemented by highly-efficient generation,” added IEEFA energy analyst Cathy Kunkel. But IEEFA warns that the administration of Gov. Ricardo Rosselló “has waged a campaign to eviscerate the commission in favour of politically-driven policies that lack transparency and protect a status quo dependence on fossil fuel imports.”

Rosselló “seems intent on establishing a regulatory system committed to approving certain ill-defined privatization transactions,” Kunkel said. “Such a move would simply codify deals that may not meet professional standards and would only perpetuate a political culture that has hobbled the island for too long.”