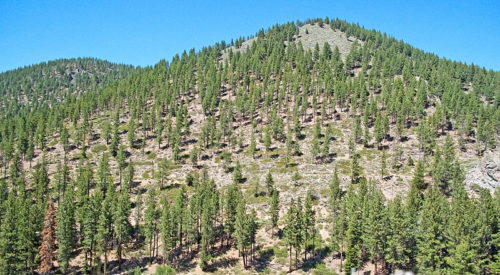 Actively replanting forests after wildfires and “allowing forests to retake marginal croplands” would help restore the strength of a carbon sink that could offset about 10% of annual carbon pollution in the United States, but has been in decline for more than 20 years, according to a new University of Michigan paper in the Proceedings of the National Academy of Sciences.

The study found that reforesting topsoils across the country already captures 13 to 21 megatonnes of carbon per year, equal to 10% of the country’s forest carbon sink and about 1% of its emissions. But “the amount of stored carbon could increase dramatically if the nation’s reforesting acreage, currently at nearly 200,000 square miles (518,000 square kilometres), grows,” Science Daily reports.

“Where reforestation is happening—either through planting of trees or through encroachment—these lands are actively adding carbon to a large pool that will continue to grow for many decades,” said lead author Luke Nave, a U-M ecologist and biogeochemist.

“The topsoils of reforesting lands provide a significant long-range solution to the problem of the declining carbon sink strength of U.S. forests, and they help to mitigate climate change,” he added. “Even modest increases in the amount of land being reforested would have a multiplicative impact on nation-wide carbon sequestration.”

The study team estimated the potential using satellite imagery and 15,000 on-the-ground observations to assess current reforestation rates. It found that only about 7% of available lands are replanted after a major disturbance, and about 10% of marginal farmland is being reclaimed by trees.

Those numbers shine a light on “the substantial C-sink capacity of this land-use transition if these lands are allowed to continue returning towards a natural forest condition,” the study stated.