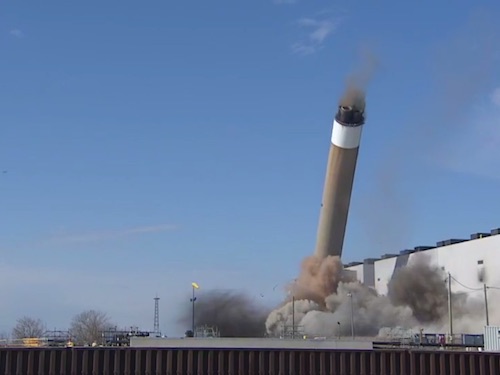 Ontario marked a symbolic milestone on the road to a post-carbon future earlier this week with the demolition of two giant smokestacks at the former Nanticoke coal station southwest of Hamilton.

(On the CBC News site, the first stack starts to fall at about 5:15 in the video.)

“As Ontario nears the fourth anniversary of eliminating coal-fired electricity generation, few events could be more symbolic than having the massive, 200-metre-tall coal smokestacks brought down at the site of the former Nanticoke Generating Station,” Environment and Climate Change Minister Chris Ballard said in a statement. The province estimates its coal phaseout is saving $3 billion per year in foregone health costs, though CBC cites a discredited Fraser Institute report alongside that calculation.

Nanticoke was North America’s biggest coal plant until it was shuttered in 2013. The province announced almost two years ago that it would repurpose the site into a 44-megawatt solar farm.

“The demolition is a sign of the times for power generation in Ontario,” CBC reports. “The Nanticoke plant operated from 1972 to 2013,” and “it was a major employer in Haldimand and Norfolk counties, providing jobs for more than 650 people at any given time.”

Haldimand County Councillor Leroy Bartlett admitted to “a touch of sadness” in seeing the smokestacks come down.

“I don’t hardly remember when those stacks weren’t there,” but “times have changed,” he told CBC. “People expect their energy to be cleaner and greener, and we knew coal was not going to be an option anymore.”