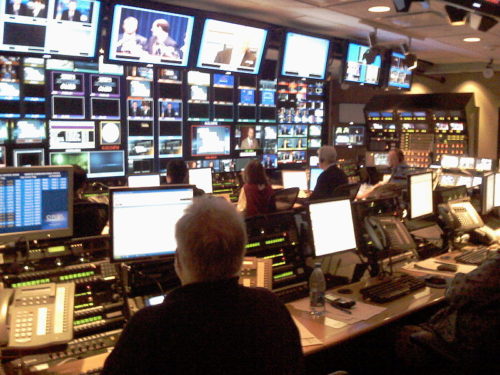 Sunday television news shows that remain critical in shaping weekly media and policy agendas in the United States largely limited on-air discussions about climate change in 2017 to the opinions of ill-informed white men, according to an analysis by Media Matters.

The study looked at the year’s climate coverage on CBS’ Face the Nation, FOX Broadcast Co.’s Fox News Sunday, ABC’s This Week with George Stephanopoulos, and NBC’s Meet the Press. Attracting a “combined audience of more than 11 million viewers in the last quarter of 2017,” the programs “play a crucial role in determining which issues and voices are included in the national dialogue,” Media Matters notes. That dynamic underscores the importance of their collective decision to “largely exclude” minorities and women, and “entirely exclude” scientists and climate journalists, from a “national dialogue” on climate change, writes senior climate and environment writer Evlondo Cooper.

Cooper notes that only 13% of guests featured during climate-related segments in 2017 were minorities, even though “polling shows that non-whites in the U.S. are more concerned about climate change than whites and more likely to say they feel its impacts.” (No surprise in the wake of Hurricane Irma and Maria.)

While the 29% of women on Sunday show guest lists in 2017 was an improvement over a grand total of zero in 2016, it’s still low—and notable, Cooper observes, given that “according to a 2015 survey, 69% of women in the U.S. are concerned that climate change will affect them personally, compared to only 48% of men.”

Meanwhile, for the second consecutive year, actual subject specialists like scientists and climate journalists were entirely shut out of the Sunday news shows—even though  “two-thirds of Americans—67%—want climate scientists to play a major role in policy decisions related to climate change, according to a 2016 survey, and 64% of Americans think climate scientists have a fair or strong understanding of the best ways to address climate change,” Cooper writes.

The Sunday programs also failed to include any journalists with expertise in climate or environmental reporting, opting instead for “political journalists or generalists, which contributed to climate change being discussed within a narrow political framework.”

The sole example of journalistic integrity was The Nation Editor Katrina vanden Heuvel, who “during an exchange about the Paris accord…pointed out that mayors, governors, and business figures remain committed to the accord,” Media Matters notes, and “called out the pervasive influence of fossil fuel money in American politics.”

Speaking of which, Trump administration officials saw plenty of air time during the climate segments, making up a whopping 35% of guest lineups. Media Matters points to that total as “a notable increase from the percentage of Obama administration guests who were featured in 2016 (10%) and 2015 (13%).”

Overall, climate coverage on the hugely popular Sunday programs was unrepresentative and ill-informed, Media Matters concludes. In 2018, “it is incumbent on the Sunday news shows to not only provide their viewers with more substantive climate coverage, but also to include a much broader array of voices in their discussions about climate change impacts and solutions.”