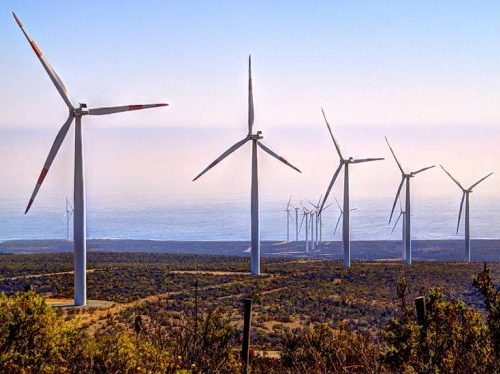 In a skirmish reflecting a wider war, Oklahoma’s thriving wind power industry—which delivers a serious boost to the state’s poorest regions—is under assault by powerful oil and gas interests made nervous by surging renewables.

Fifteen years ago, the state successfully drew wind companies to the state’s poorest corners, by way of “two main incentives—a five-year exemption for local property taxes and a tax credit for zero-emissions electricity generation,” the Houston Chronicle reports. Today, “the wind industry is the largest taxpayer in 14 Oklahoma counties, most of them rural, and generates about 9,000 direct and indirect jobs in the state.”

Until two years ago, the turbines co-existed with Oklahoma’s vast number of oil and gas wells. Neighbourliness evaporated, however, when the price of oil plunged, taking Oklahoma’s budget with it. “Nearly a quarter of Oklahoma’s revenue comes from the oil and gas industry,” the Chronicle states, “which made it particularly vulnerable to the steep plunge in crude prices between 2014 and 2016.”

Refusing to acknowledge the link between volatile oil prices and broken budgets, Oklahoman oil and gas interests led by Trump administration energy advisor Harold Hamm, CEO of one of the country’s biggest independent oil companies, launched an aggressive campaign of TV and radio ads that blamed US$116 million worth of wind energy incentives in 2016 for the budgetary shortfall.

Those efforts have paid off. In early February, the paper notes, “lawmakers proposed legislation that would cap the cumulative amount of tax credits that all existing wind farms can claim each year to no more than $18 million,” vastly less than the $74 million they claimed in 2016.

That a plan to impose further taxes on wind energy failed to secure the majority needed to pass in the state legislature a few weeks ago is hardly an end to hostilities. Wind energy advocates anticipate further efforts “to impose new taxes on wind power and moves to cut incentives already awarded to projects in years past.” They have already lost the battle to implement state net metering laws “which would make solar energy more attractive by allowing owners of rooftop systems to sell excess power into the grid,” writes Chronicle reporter Ryan Handy.

The action in Oklahoma, said Karl Rabago, executive director of New York’s Pace University Energy and Climate Center in New York, is part of a larger war on renewable energy that is ramping up “as wind and solar increase market share” and Trump energy policy “seeks to promote oil, natural gas and coal”. Arizona killed net metering in 2016, and in Ohio, “lawmakers are considering rolling back renewable energy standards, which require utilities to buy a share of their power from wind, solar, and other renewable sources.”

Back in Oklahoma, the state’s willingness to throw its wind turbines under the Big Oil bus doesn’t seem to be helping it balance the books. As of February, “Oklahoma was running two concurrent legislative sessions to fill a $600-million hole in the current budget,” the Chronicle reports, plus another $878 million gap for its next fiscal year, which begins July 1.

Should legislators continue to undermine the wind industry, it may ultimately be the state’s 14 poorest counties that are left out in the cold. Portugal’s EDP Renewables, which has its North American headquarters in Houston, told the Chronicle that “the elimination of the state tax credits and the prospect of other policy changes has led it to cancel projects in Oklahoma.”

“We are a multinational company, the fourth largest renewable energy company in the world,” said Director of Government Affairs Vanessa Tutos. “We can go elsewhere.”