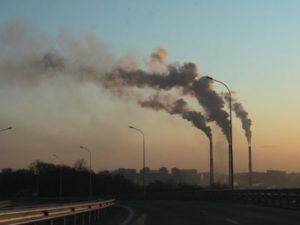 The gap between Canada’s Paris commitments and its climate policies has grown from 44 to 66 megatonnes in the last 18 months, according to a federal report filed with the United Nations Framework Convention on Climate Change (UNFCCC).

The mandatory report quantifies the margin “between Canada’s greenhouse gas promises and the likely result of its policies,” The Canadian Press reports. “The information comes as the Liberal government continues to promise a new pipeline will be built to take bitumen from Alberta’s oilsands to ports in British Columbia.”

Ottawa had to acknowledge the new numbers, but seems to be doing its best to disassociate them from the current battle over pipeline and tar sands/oil sands policy.

“When asked to explain the change by French-language newspaper Le Devoir, Environment and Climate Change Canada officials attributed it to an increase in the anticipated emissions from the oil and gas industry, and demographic growth,” writes Greenpeace Canada climate and energy campaigner Keith Stewart. “It is unlikely that there have been radical changes in demographic projections over the last two years, so the growth is likely primarily due to an increase in anticipated carbon pollution from Canada’s oil and gas sector.”

(Statistics Canada’s last long-term projection of the country’s future population growth was published in May 2015.)

But the federal summary of the UNFCCC report puts the accent on Canada’s small population, large land mass, wide-ranging climatic conditions, and growing economy, stating that the country’s “unique geographic, demographic, and economic circumstances influence its GHG emissions profile.” It manages to summarize the country’s climate programming and vulnerabilities without once using the words “pipeline”, “tar sands”, or “oil sands”—or the number “66”, for the gap between its projected emissions in 2030 and the Harper-era target the country adopted under the Paris agreement.

Prime Minister Justin Trudeau and Environment and Climate Change Minister Catherine McKenna have repeatedly declared that objective a floor, not a ceiling for Canada’s climate ambition.

“This revelation comes at an awkward time for the Trudeau government, which has been loudly proclaiming that building new oil pipelines (which will increase emissions by enabling increased upstream production) is the key to reducing overall emissions in line with our Paris target,” Stewart notes.

“Federal environment and natural resources ministers recently co-authored an op ed in the Edmonton Journal advocating for the Kinder Morgan pipeline while simultaneously stating that ‘meeting our climate targets is non-negotiable’. If they really mean that (and I hope they do), then they should show us the math.”

I agree. “Show us the math.” The absurd idea that building new pipelines is the key to reducing overall emissions is proof that we live in an Orwellian world.