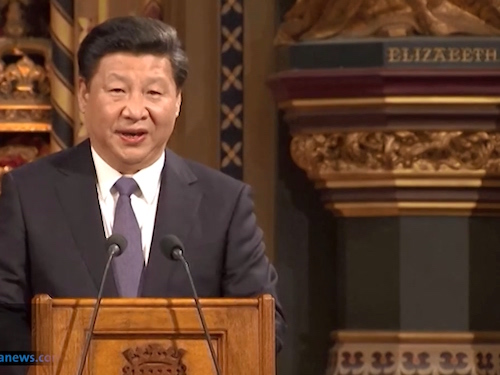 Chinese President Xi Jinping’s call for an “ecological civilization” that ensures “harmony between human and nature” during last October’s Communist Party congress in Beijing is being met with a mix of hope and skepticism, but may also have a deeper resonance with Chinese culture, author Jeremy Lent suggests in a recent post on Resilience.org.

The speech turned some heads at the time, with its call for a “legal and policy framework” that “facilitates green, low-carbon, and circular development,” promotes afforestation and wetland conservation and restoration and takes “tough steps to stop and punish all activities” that damage the environment. “What we are doing today” Xi concluded, is “to build an ecological civilization that will benefit generations to come.”

It might be all talk, but Lent asks a provocative question: If a very different kind of rhetorical appeal brought Donald Trump to the White House, “could it be that Xi’s ecological vision could offer a glimpse to a hopeful future?” [Maybe, but are the Russian bots pulling for Xi? Had to ask. – Ed.]

“In fact, this is just the type of fresh, regenerative thinking about transforming the current global economic system that many in the environmental movement have been calling for,” Lent writes, and “Xi’s rhetoric does seem to be grounded in at least some reality,” with the country taking a lead on several key aspects of a post-carbon transition. But while some environmental thinkers are applauding Xi’s vision, others, like economist Richard Smith, point to China’s need “to maximize economic growth, employment, and consumerism to an even greater extent than in the West,” Lent writes.

“These forces, he claims, run diametrically counter to the vision of an ecological civilization.”

While China has come a long way in achieving its economic goals, pouring more cement between 2011 and 2013 than the United States did over the entire 20th century, the “industrial avalanche” has come “at great cost to China’s—and the world’s—environmental well-being,” Lent notes. China’s hyper-industrialization requires Xi “to let the polluters pollute, pump China’s CO2 emissions off the chart, and thereby bring on the ecological collapse not just of China but the whole planet,” Smith wrote. “Xi Jinping can create an ecological civilization or he can build a rich superpower. He can’t do both.”

But Lent sees some possibility that China can thread that needle. “While it is clear that future economic growth at anything close to China’s historic rate is untenable, there is a more nuanced question that poses the possibility of a sustainable way forward for both China and the world,” he writes. “Once China has regained its status as a leading world power, can it achieve yet another transformation and redirect its impressive vitality into growing a life of quality for its people, rather than continued consumerism? Is it possible that Xi Jinping is sowing the seeds of this future metamorphosis with his vision of an ecological civilization?”

That shift would require China to give up an authoritarian style of government and devolve decision-making back to citizens, he writes. And for westerners, “it would take a tremendous dose of cultural humility to accept philosophical leadership from China on the path to a flourishing future for humanity.” But Lent sees a “deep recognition of human interconnectedness” in traditional Chinese culture as one element that could help build future well-being for the entire human family.