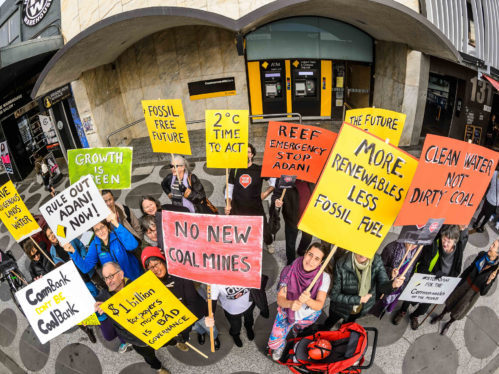 Media reports on fossil fuel protests tend to frame oil, gas, and coal development as positive for society, opponents as “irrational, few, and extremist”, and point policy discussions “towards how drilling should take place, rather than whether it should happen at all,” a team of three researchers concludes from an analysis of six years of news coverage of fossil projects and protests in Aotearoa New Zealand.

The study included interviews with more than 50 climate activists and representatives of non-government organizations, oil and gas companies, and local governments. Much of the reporting built the narrative that protesters were taking their democratic right to protest too far, write lecturers Sophie Bond, Amanda Thomas, and Gradon Dipose on The Conversation.

“Discussions about the ethics of further fossil fuel extraction in a rapidly-changing climate were lost—at a time when we need to be debating how we might change our economy and society to avoid the worst of climate change,” they write. “Media portrayals of environmental activists as hopelessly idealistic, irrational hippies are nothing new. But when mainstream media continues to repeat these ideas, and frames the status quo as common sense, the public is denied opportunities for genuine debate about solutions to tricky environmental problems.”

The article includes a case study of a 2016 protest in the small university town of Dunedin, part of a series of events across the country to inform customers of the ANZ Bank about its NZ$13-billion investment in the fossil industry. “Until this point, mainstream media outlets had resisted negative framing of protesters, and had quoted activists at length in their reporting of the blockade,” Bond, Thomas, and Dipose write. But after police told customers to climb over the blockaders and one elderly customer was inconvenienced—even though blockaders and bank staff had encouraged her to use a side door—the coverage shifted.

“Reporting of the protests quickly changed and activists were portrayed as disrespectful and taking the protest too far. Social media erupted, and 350 Aotearoa’s Facebook page attracted more than 2,000 comments within a few hours, including threats of violence against the blockaders,” they recall. “Even though a protester reported being kneed by police, police were represented in the media as having been balanced and compelled to act in this way.”

The history matters, they write, at a time when “the new government in Aotearoa New Zealand has sent some positive signals about taking climate change seriously. Consultation on a zero carbon act will begin later this year. In-depth media coverage that engages a broad range of people including activists, and pro-democracy reforms, will be essential to developing good debate and the best possible response to climate change.”