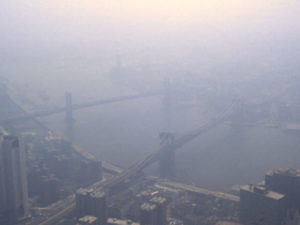 With tailpipe emissions from the transportation sector beginning to decline across parts of North America, the United Kingdom, and the EU, organic compounds in everyday household products that originate from petroleum are playing a key role in making a chemical soup of urban outdoor air.

Which means that, even if every internal combustion vehicle were replaced tomorrow by a bike or a carbon-free electric car (which still depends on jurisdiction), urban dwellers would still be riding through smog, according to a new study in the journal Science.

The study, led by chemical scientist Brian McDonald of the U.S. National Oceanic and Atmospheric Administration (NOAA), took a number of “commonly-used household and industrial products such as pesticides, printing inks, adhesives, cleaning agents, and personal care products” and measured the volume of volatile organic compounds (VOCs) they passively released, The Independent reports. VOCs are “chemicals that, upon entering the air, can react to produce both fine particulate matter and ozone—two substances that are regulated widely due to their severe effects on lung health.”

Petroleum contains a wide variety of VOCs, all the products tested in the NOAA study contained petroleum, and, “Dr. McDonald and his colleagues concluded these products were responsible for half of fossil fuel VOC emissions in industrialized cities.”

In the U.S., “the amount of VOCs emitted by consumer and industrial products is up to three times greater than estimated by current air pollution inventories,” the paper adds. The study found that “these inventories also overestimate the contribution made by road vehicles,” pointing to “a need to diversify regulatory efforts beyond road traffic in order to make a dent in some of the toxic chemicals infiltrating urban environments.”

Respiratory specialist Dr. Anthony Frew of Brighton and Sussex Medical School called the research “a useful reminder that discussions of air pollution need to consider all sources of pollutants, and that measures targeting cars only address part of the problem.” Others highlighted “the need to investigate more environmentally friendly ways of producing certain household products,” The Independent notes.

But the “surprising” findings still “should not distract from the important business” of getting fossil vehicles permanently off the roads. “This work doesn’t mean that traffic is unimportant,” Frew said. “Traffic remains an important source of pollution, and we still need to reduce the number of vehicle-miles driven per year by personal and commercial vehicles.”