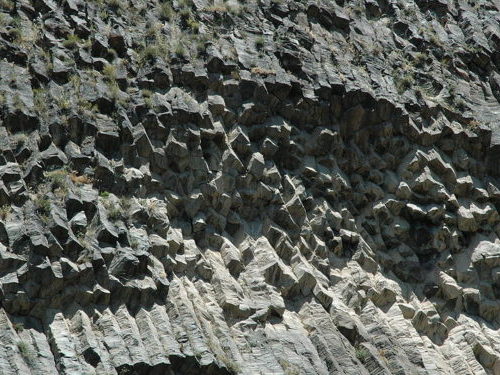 “Farming with rocks”, particularly silicates like basalt, could simultaneously help address climate change, soil health, and food security, according to a new paper in the journal Nature Plants.

In a world struggling to keep global temperature rise below 2.0°, the need for technologies to actively remove carbon dioxide from the atmosphere is becoming “increasingly likely”, write study co-authors Professor David Beerling, director of the Leverhulme Centre for Climate Change Mitigation, and University of Illinois at Urbana-Champaign crop scientist Stephen Long, in a post for Carbon Brief. As one part of that picture, they point to enhanced rock weathering, an acceleration of a natural chemical process in which rain absorbs CO2 from the atmosphere, reacts with rocks and soil where it lands, gradually breaking them down, and forms bicarbonate (HCO3) in the process.

The compound washes into the ocean carrying its load of carbon, which is then “stored in dissolved form for hundreds of thousands of years, or locked up on the sea floor,” they write. With enhanced weathering, where mechanically pulverized silica is spread across vast stretches of agricultural lands, “plant roots and microbes in the soil speed up the chemical reactions.”

The benefits of this chemistry could be considerable. Beerling and Long estimate that “applying 50 tonnes of basalt powder per hectare per year to 70 million hectares of the Corn Belt of North America might sequester as much as 1.1 billion tonnes of CO2 in the long run—equivalent to 13% of the global annual emissions from agriculture.”

They also see a natural fit between cure and cause, since “countries with considerable productive farmland have the largest potential to sequester CO2 through enhanced weathering. These include the U.S., China, India, and Russia, which all grow crops on a massive scale and make up the highest emitters of CO2.”

The process would be costly, the authors admit. Though “current cost estimates are uncertain and vary widely,” and could be offset by improved yield and reduced need for fertilizers, “the most detailed analysis to date puts operational costs at US$52 to $480 per tonne of CO2 sequestered.” That compares to a price range of $39 to $100 per tonne for bioenergy with carbon capture and storage, a higher-profile option that has also generated more intense criticism and second-guessing.

The other concern is that, depending on the degree of rock pulverization, “the energy demand could account for 10 to 30% of the amount of CO2 sequestered,” Beerling and Long note. That’s just one of the issues that would have to be anticipated and managed in the process of mining, grinding, and spreading rocks on a large scale.

But the benefits of the process extend far beyond CO2 sequestration, they maintain, noting that enhanced weathering can help combat ocean acidification by making water more alkaline, while boosting soil health and food security. “There is a long history of small-scale farming using silicate rocks to improve crop yields in highly-weathered soils in Africa, Brazil, and Malaysia,” they note.

“In Mauritius,” for example, “sugar cane trials as far back as 1961 added crushed basalt to soils and increased yields by 30% over five successive harvests.”