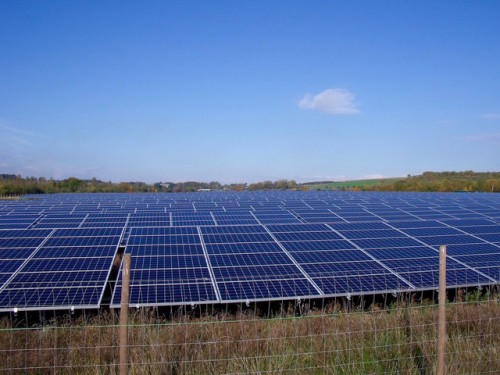 Converting some of the biggest tobacco plantations in the U.S. into solar farms would enrich North Carolina farmers, generate significant amounts of renewable energy for state use, seriously reduce the supply of a known carcinogen, and save nearly 500,000 U.S. lives per year, according to a study team at Michigan Technological University.

“Tobacco use is often credited as the leading cause of preventable death globally,” reports Engineering and Technology Magazine, but “as long as the tobacco industry remains highly profitable, tobacco farmers are likely to continue growing tobacco plants, their primary source of income.”

Making the switch from plants to panels should be seriously considered by both farmers and the state, according to MTU Professor Joshua Pearce. In a recent case study of North Carolina tobacco plantations, Pearce “conducted a sensitivity analysis on the effects on profit of installed solar farms and compared profit from solar energy with profit from continued tobacco farming, accounting for declining tobacco use in the U.S. and the increasing cost of electricity,” E&T notes.

“We were interested in what conditions were needed to enable tobacco farmers to begin installing solar energy systems on the same land,” he said. And the study team was in for a surprise: “Even with only modest increases in electricity costs, solar farming appeared to provide annual profit increases of thousands of dollars, even tens of thousands of dollars, per acre.”

Adding it up, E&T concludes that “if every tobacco farmer in North Carolina converted to generating electricity via solar panels, they could generate up to 30 gigawatts. This is equivalent to the entire state’s peak summer load.”

The ability to generate that volume of electricity at a profit is significant, because while rooftop solar is an efficient way to power individual homes, a zero-carbon economy will require huge volumes of solar power captured by vast solar arrays, Pearce noted—and those panels can’t realistically be placed on land already used for food production.

Knowing that “more modest attempts to offset fossil fuels with biofuels required so much land that food crops were offset, raising food prices,” he told E&T, “we were looking for large areas of land that could be used for solar power that would not increase world hunger.”

Enter the tobacco fields of North Carolina, whose main cash crop is a product that brings an agonizing death when used as directed. [Mrs. Brasloff, this one’s for you. – Ed.]

U.S. Centers for Disease Control data indicates that converting tobacco farms to solar plantations would save more than 480,000 Americans annually from dying of cigarette-induced lung disease, including more than 41,000 from the fatal effects of second-hand smoke.

E&T notes that in North Carolina, which currently relies heavily on coal-fired electricity, making the crop shift from tobacco plants to solar power “would save 2,000 American lives per year from pollution reduction alone.”