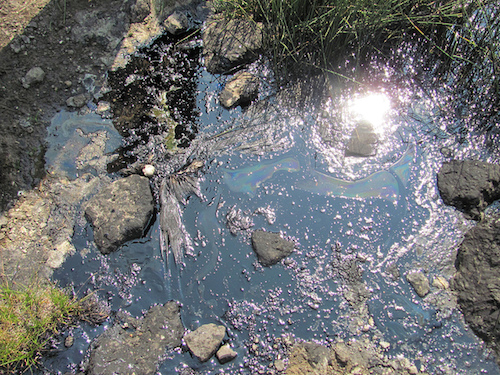 Natural Resources Canada is resurrecting a fossil industry talking point with research that suggests diluted bitumen will usually float when it comes in contact with a waterway—at just the moment when British Columbia is calling for independent review of the risk of a coastal dilbit spill if the Trans Mountain pipeline expansion is ever completed.

“Answering whether bitumen sinks or floats and how to clean it up are key concerns that have B.C. considering restrictions on increased shipments of the product through B.C. that put Kinder Morgan’s C$7.4-billion Trans Mountain pipeline at risk,” the Vancouver Sun reports.

NRCan Senior Scientist Heather Dettman told the paper earlier this month that there’s not much to worry about—most of the time. But her assurance runs directly counter to findings from a comprehensive study by the U.S. National Academies of Sciences, Engineering and Medicine, which found serious risks associated with a product that behaves very differently in water from conventional crude oil.

“The long-term risk associated with the weathered bitumen is the potential for that [oil] becoming submerged and sinking into water bodies where it gets into the sediments,” study committee chair Diane McKnight said at the time. “And then those sediments can become resuspended and move further downstream and have consequences not only at the ecosystem level, but also in terms of water supply.”

The main message in the 144-page report was “that the thick type of oil called diluted bitumen, or ‘dilbit,’ initially behaves like conventional oil in the first few days following a spill but then quickly degrades, or weathers, into a substance so chemically and physically different that it defies standard spill responses,” InsideClimate News reported. “The report recommends tailoring spill response plans by oil type, a stark contrast to the reassurances often uttered by energy companies that dilbit doesn’t need special regulations.”

A key point of contention in the ongoing Trans Mountain saga is whether the federal government adequately considered all the relevant science before approving the project.

Dettman said her research dating back to 2014 shows various grades of dilbit floating on the surface for three or four weeks, “even under wave conditions that would cause conventional crude to mix in with the water column,” the Sun reports.

“From a density perspective, it will be floating unless it’s really stormy, then it can go anywhere, the same as any other petroleum product,” she said.

Michael Lowry, spokesperson for Western Canada Marine Response Corporation, said the biggest spill his organization encountered took place in 2007, when Trans Mountain allowed about 100 tonnes of mixed bitumen and synthetic oil to drain into Burrard Inlet. “In nice weather and close to the industry-funded spill responders’ facilities, Lowry said they were able to recover 90% of the oil,” the Sun states.

In the comments section below the Sun article, readers weren’t too keen to take Dettman’s conclusions at face value. “According to a 2013 federal government study, diluted bitumen had been proven to sink when spilled in marine water bodies, particularly with the presence of suspended fine sediment, when weathered, and with a moderate degree of wave activity,” wrote Thomas Chan of Burnaby. “These suspended sediment conditions happen to be common throughout B.C.’s south coast region, primarily due to high-volume river runoffs and seasonal storm activity.”

He added that, in wave tank testing conducted in 2013 by three federal departments, the characteristics of the bitumen made it impossible to study its behaviour beyond the first hour—after that, the dilbit “adhered to the walls and wave absorbers of the tank, restricting further evaluation,” the study report stated. “These were unexpected observations that did not transpire during previous work with conventional oils.”

Sun reader Geoffrey Pounder agreed that “only a small fraction of crude oil spilled at sea is recovered under ideal conditions,” with one study suggesting 10% recovery from the sea surface. “In rough seas, recovery rates are even less.”

“Gee, what nice clear and clean water!” commented reader Neil W. Humphrey. “Also, note they cannot reproduce the tides and currents that will impact any spill in the Gulf Islands.”