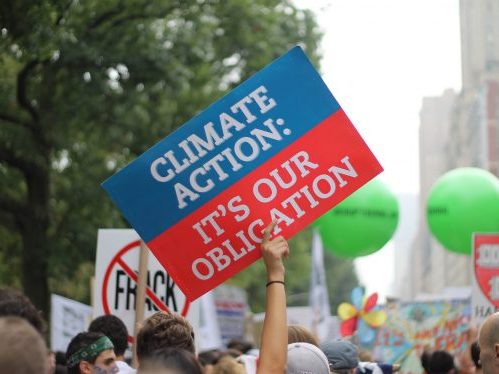 The key to successful climate action lies in the slow, avowedly collective process of speaking truth to power through “a series of actions, escalated over time,” writes respected long-time Quaker organizer George Lakey.

Lakey is founder of Earth Quaker Action Team, which in 2015 won a five-year civil disobedience campaign against a major U.S. bank that was financing mountaintop removal coal mining in Appalachia. In a recent blog for Resilience.org, Lakey celebrates the evolution of a group of Portland, Maine Quakers beyond “one-off” actions that were “highly meaningful to them personally” and generated good publicity, but “would, in reality, not make a difference to policy”. That’s because, to achieve real system change, climate hawks have to play the long game.

After one ultimately dissatisfying one-off, protesting the Trump administration’s withdrawal from the Paris agreement, Portland attorney Rob Levin began searching “for something more likely to mobilize pressure on a perpetrator of the climate crisis,” Lakey writes. Levin discovered that Central Maine Power (CMP), the largest electrical utility in the state, had spent two years lobbying against solar power—despite its public stand for renewables.”

Deciding to “shine the light” on CMP’s hypocrisy, 30 Maine Quakers “went to the Augusta, Maine headquarters on January 27, despite the likelihood that they would be locked out of the building on a frigid day,” Lakey recalls. Blocked by security from entering the building, and denied the opportunity to speak with a CMP representative, “Levin and three others tried to enter and they were arrested,” released on very high bail, and barred from returning to CMP property. Importantly, he writes, “news reports were sympathetic, highlighting the alleged duplicity of Central Maine Power.”

That kind of sympathy can be a powerful weapon, Lakey notes. The state legislature “is considering a bill that would require Maine homeowners with solar panels to install a new meter, forcing them to pay a fee for their own solar generation,” he writes. According to another of the Quakers arrested at CMP headquarters, the utility is supporting the bill with “phony arguments saying that poor people are going to be hurt by rich people putting solar on their roof.”

In response, Levin and his fellow activists are considering calling attention to the upcoming vote “by returning to the CMP headquarters and holding a prayer meeting inside the lobby,” a tactic “that several other Quaker groups have employed recently,” Lakey notes.

“Last March,” he writes, “Seattle Quakers and allied clergy held a prayer meeting inside a Chase Bank to expose its over US$300 million in funds to the Bakken pipeline, which is strenuously opposed by the Sioux.” In this case, as in all such actions, the Quakers quietly but firmly made their case impossible to ignore, by quietly but firmly telling the truth.

That’s where the long game comes in, since “even getting the first step of truth-telling done…requires some time. Many institutions doing harm have built up a lot of legitimacy. Utilities are usually there for us when the ice and weather bring down the power lines, or when extreme heat brings us close to brownout, and it’s the larger grid that saves us.”

The antidote takes time because news and knowledge only spread “through repeated sharing: conversations, social media and, yes, a series of dramatic actions from prayer to civil disobedience.” That means a longer haul that replaces quick, flashy actions with day in, day out organizing, recognizing that “what’s personally gratifying isn’t necessarily effective.”