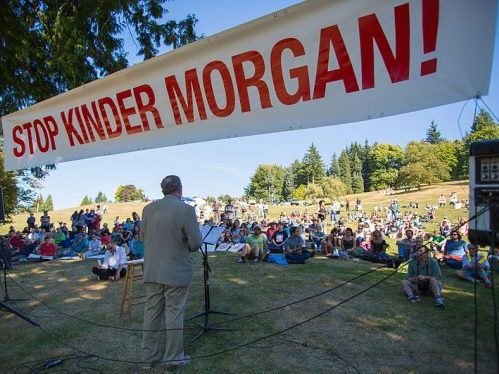 Last week ended with both sides in the Trans Mountain pipeline dispute seeking legal backing for their positions, with British Columbia and the City of Burnaby appealing the National Energy Board’s nullification of municipal bylaws while a fossil-affiliated independent senator proposed federal legislation to shut down all opposition to the project.

Burnaby announced its appeal Friday, arguing that Houston-based Kinder Morgan Canada should be required to comply with municipal rules as it proceeds with its C$7.4-billion pipeline expansion. “Now the provincial government is following suit, saying it has filed leave to appeal the board’s ruling with the Federal Court of Appeal,” the Calgary Herald reports. B.C. argued the NEB erred by “too broadly defining federal jurisdiction over interprovincial pipelines.”

On Thursday, meanwhile, Sen. Doug Black—a founding director of the Energy Policy Institute of Canada (EPIC), and former chair of the University of Calgary Board of Governors—introduced a bill to declare the pipeline expansion “a work for the general advantage of Canada.” Columnist Claudia Cattaneo casts the measure as “a blunt move, based on a section of the Constitution that hasn’t been invoked in decades, but that if passed could shut down British Columbia’s opposition” to Trans Mountain.

“Enough is enough,” Black said. “A foundational piece of this bill is the reaffirmation that we operate under the rule of law. And the subtext, of course, is that British Columbia is undertaking activities that contravene the rule of law. And in a civilized society, we cannot tolerate that.”

Black “believes the Senate will pass his proposed Trans Mountain Pipeline Project Act,” Cattaneo writes. “He said it has the support of senators from across the country, including B.C. Conservative Senator Richard Neufeld, who seconded it. It would have to be approved in the House of Commons, too, to become law.”

Earlier Friday, after Burnaby announced its appeal but before B.C. joined in, Globe and Mail columnist Gary Mason fretted that a “dramatic showdown” could be shaping up around Kinder Morgan. Provincial support for the municipal action “will only infuriate an increasingly frustrated Prime Minister even more,” he wrote. But “construction will also be a signal for activists who have been waiting in the wings for the project to get under way in earnest. They have promised the fight of their lives to ensure Trans Mountain doesn’t go ahead. Federal politicians such as the NDP’s Kennedy Stewart are already predicting violence.”

Yet the concern at the heart of the dispute—B.C.’s focus on the science surrounding diluted bitumen spills—“was actually supported by the federal government’s Environment Department in 2016,” National Observer noted last week.

In January of that year, Environment and Climate Change Canada flagged significant “knowledge gaps and uncertainties with respect to hydrocarbon product behaviours in the marine environment,” and called on the company to fund more research on spill response planning and risk assessment. That prompted the federal government to introduce a $1.5-billion ocean protection plan at taxpayers’ expense, just as Canadian fossils cut funding for spill research.