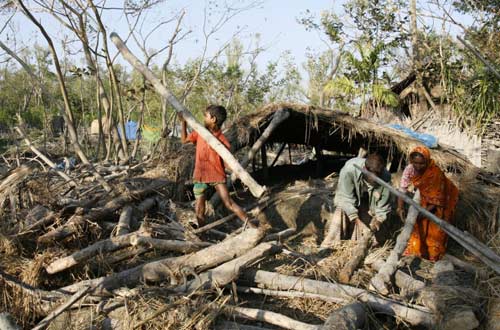 With ever more climate refugees in search of safe havens, and xenophobic populism on the rise, immigration policies that offer the suddenly nationless shelter and support are growing ever more important—and imperiled.

Grist points to “the unprecedented brutality of the 2017 hurricane season” that will cause post-Maria Puerto Rico “to lose close to 500,000 residents in the next two years,” a level of migration that shows “the potential that natural disasters have to destroy livelihoods, displace families, and uproot entire communities.”

As American citizens, displaced Puerto Ricans cannot be turned away from their mainland home nation. Climate refugees from elsewhere, however, may find themselves quite literally at sea, as “experts warn that countries like the United States are currently adopting policies that indicate climate migrants will be met with closed doors as opposed to open arms.”

Grist contributor Justine Calma cites the Trump administration’s recent decision to refuse any further Syrian applicants into the American government’s temporary protected status (TPS) program. That immigration category “offers its protections to émigrés from nations deemed too unsafe to return to because of armed conflict or environmental catastrophe,” while giving “eligible individuals employment authorization to work in the United States, as well as protection from deportation.”

Citing a recent study published in Science, Calma adds that conflict and environmental catastrophe will increasingly go hand in hand as climate change spools up, with “the number of migrants who apply for asylum in the European Union likely to triple by 2100” at the current rate of warming. Such a merging of calamities was certainly the case in Syria, according to a 2015 study that “detailed how drought, crop failure, and the resulting migration from rural areas to urban centres contributed to the onset of the Syrian civil war”—an event whose genocidal proportions led to the country being placed on the U.S. TPS program list in 2012 as a decidedly “unsafe” place.

“TPS has been incredibly important for thousands of Syrians in the U.S.,” said American Relief Coalition for Syria Coordinator Matthew Chrastek. “It has allowed them to work, to build businesses, to continue their education, but most importantly, to live in peace and security.”

While Trump has said he “will extend relief for nearly 7,000 Syrians with temporary protected status in the U.S.,” Calma notes, there’s now a cap on new applicants from the country.

Yet “temporary protected status is currently the only means to asylum for migrants to the U.S. who were affected by natural disasters,” she reports. “And even that policy has its limitations. Since it was only designed to provide temporary humanitarian relief, status holders are not given a green card. In fact, there is no pathway for them to become permanent residents or U.S. citizens. If the federal government decides not to renew a country’s designation, all those who have been able to build a life for themselves here lose the ability to work lawfully and can be deported.”

Such will become the tragic case even for those Syrians who were admitted to America before the 2016 election. Those who might seek to come now, alongside migrants from El Salvador, Haiti, Sudan, and Nicaragua, devastated nations which have nonetheless been designated “safe enough” by the Trump administration, will be deemed stateless and left to fend for themselves.