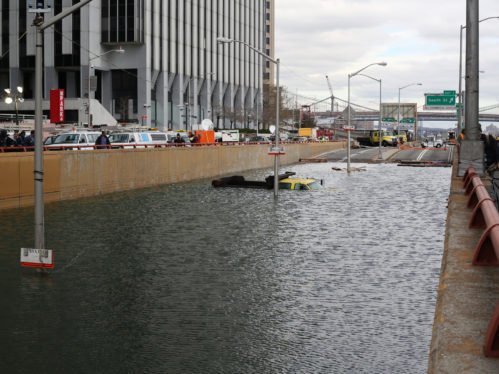 Sea level rise could accelerate to four inches (10 centimetres) per decade by the end of this century, for a total of at least two feet (0.61 metre) between 2005 and 2100, according to a new study this week in the Proceedings of the National Academy of Sciences.

“At that rapid pace of change, vulnerable communities might not be able to keep up,” InsideClimate News reports. “Storm surges will increase erosion and damage homes, businesses, and transportation infrastructure in some areas. In other places, seawater will intrude on freshwater aquifers. In South Asia and the islands, people will lose the land where they live and farm. And the changes will arrive much faster than they do today.”

The study confirms warnings from the Intergovernmental Panel on Climate Change, NASA, and the European Environmental Agency that the rate of change in sea levels has been accelerating in recent times, ICN notes. “Some folks have not wanted to do anything about climate change because they don’t trust the models,” said lead author Steve Nerem of the University of Colorado-Boulder. “These findings support the modeled projections.”

Moreover, ICN states, “if the rate of acceleration intensifies—as it might if global warming speeds the melting of the Greenland and Antarctic ice sheets and glaciers—a two-foot rise might be the low end of the likely range. The study assumes a steady acceleration at only the rate observed in the past 25 years.”

Co-author Gary Mitchum of the University of South Florida called the study a “game-changer” for conversations about climate change, providing what InsideClimate calls “a surprising detailed view” of the risks ahead.

“Even cities that already know they’re at risk may not be able to prepare fast enough without additional investments in disaster relief and resilience,” writes InsideClimate reporter Bob Berwyn, adding that Mitchum’s hometown of Tampa “has been listed as one of the 10 cities globally most vulnerable to sea level rise. If the rates of adaptation and mitigation don’t keep pace, damage from storm surges and extreme rains is likely to increase.”

With melting ice sheets in Greenland and Antarctica one of the key drivers of sea level rise, Nerem warned the projections in the study might be understated.

“There may be abrupt changes in the ice sheets,” he said. “That’s why I think this is a conservative estimate, because it doesn’t consider what [happens] if the ice sheets really start to go.”

More reflectivity can cool the world