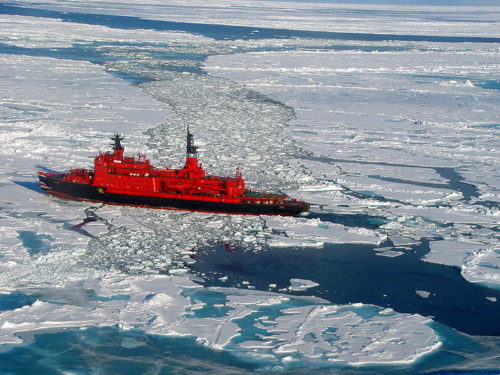 China is laying plans to establish a “Polar Silk Road” as Arctic sea ice melts away to open water due to climate change.

The country announced its plans for a network of international shipping lanes in its first official policy paper on the region, the BBC reports.

“President Xi Jinping’s US$1-trillion (£700-billion) Belt and Road Initiative seeks to rebuild much of Eurasia’s infrastructure of ports, roads, and rails and put China at its centre,” and “encourages businesses to build infrastructure and conduct commercial trial voyages in the Arctic,” the UK broadcaster notes.

“Last August, a Russian tanker travelled from Norway to South Korea without an icebreaker escort for the first time.”

The northerly routes are central to China’s international trade ambitions, BBC adds, given that “the northeast passage could take 20 days off the 48 days it currently takes to get to Rotterdam from China via the Suez Canal.”

The Beijing document stresses that China “hopes to work with all parties” to develop the routes, and that every country’s “right to use the Arctic shipping routes should be ensured.”

Perhaps anticipating charges that its latter-day Silk Road proposal is a thinly-veiled resource grab, “the paper does acknowledge China’s interests in oil and gas, minerals, fishing, and other resources in the region,” the BBC states. But it insists on “an interest in developing them cooperatively with other nations and Arctic states.” According to Reuters, Vice Foreign Minister Kong Xuanyou dismissed concerns about China’s intentions as “absolutely unnecessary”.