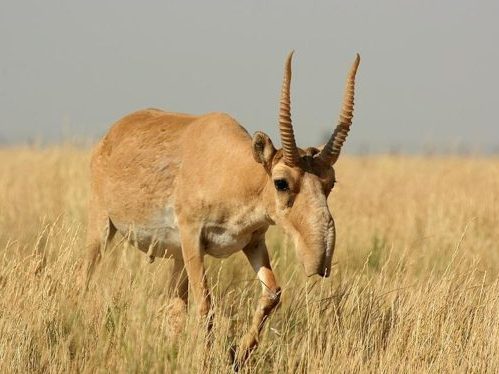 An unseasonably warm, wet May has been identified as the ultimate culprit in a devastating 2015 outbreak of hemorrhagic septicemia among the saiga, an endangered antelope native to central Kazakhstan.

“It took just three weeks to destroy 60% of the world’s saiga population,” the Washington Post reports, citing UK wildlife veterinarian Richard Kock, whose recent paper in the journal Science Advances confirms the unusual weather pattern as the trigger that caused a normally benign bacterium in the saigas’ respiratory tract to “become suddenly deadly in 200,000 animals scattered across 65,000 square miles of habitat.”

“It was quite shocking,” Kock said. “The animals were in a sort of foggy soup, and it looks like the bacteria naturally occupying the tonsils were woken up by this environmental factor.”

While Kock hesitates to blame climate change explicitly, the Post notes, he is worried by the wider implications of the story. “Animals and their microbiomes have evolved within certain limits over millions of years,” he said. Now, “we are shifting the environmental conditions rapidly outside of that envelope.”

Kock isn’t alone in his concern. “In 2015,” the Post states, “ the Proceedings of the National Academy of Sciences published a sweeping review of the world’s worst mass-mortality events—incidents during which either 90% of a species was wiped out, more than one billion individuals were killed, or 700 million tons worth of biomatter (the equivalent of nearly 2,000 Empire State Buildings) was destroyed. Since 1940, such events have become more common for birds, fish, and marine invertebrates.”

Notably, it was rarely a single factor that pushed a species into, or near, extinction. “Most of the time, the die-offs were attributed to ‘multiple stressors’—problems that piled up until the species reached some kind of vulnerability threshold,” the Post notes. “In nearly a quarter of all cases, climate played a role.”

For the imperiled saiga, the outlook “remains unclear,” adds science reporter Sarah Kaplan. “These holdovers from the Ice Age are tough creatures, evolved over tens of thousands of years to survive the harsh conditions of their habitats. In the past century alone they’ve rebounded twice from the brink of extinction.”

But while the saiga population may yet recover, its recent encounter with a microbe made rogue by weird weather has wider implications, Kock said. “If this starts happening on a wider scale,” he told Kaplan, “it’s potentially catastrophic for livestock, for conservation, and ultimately for all mammals.”