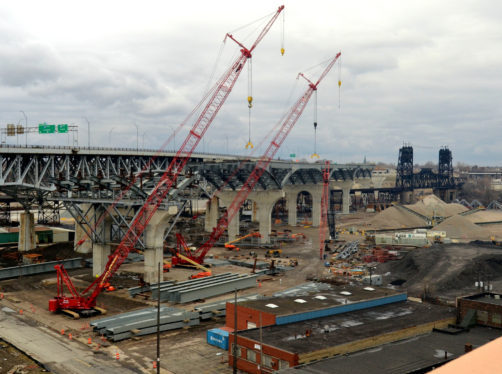 The Trump administration’s apparent determination to loosen environmental regulations for its long-awaited, US$1.5-trillion national infrastructure plan, due to be released later today, may actually make those projects more vulnerable to the impacts of climate change, the New York Times reports.

The plan, built around a reported $200 billion in federal dollars over 10 years, is expected to plunge cash-strapped cities and states into a “‘Hunger Games’-style fight” to grab their share of an underfunded federal program, while undercutting environmental regulations under the pretext of speeding up project delivery.

“But while the proposal represents one of the administration’s main legislative ambitions, it could directly clash with one of its defining regulatory principles, which is to question the risk from global warming and roll back regulations addressing climate change,” the Times notes.

“The Trump infrastructure blueprint is almost certain to call for expensive new roads, bridges, airports, and other projects in areas that are increasingly vulnerable to rising waters and other threats from a warming planet. Engineers and researchers say that construction plans should consider these design constraints at the outset. Their concern is that a plan led by a White House that has both discounted climate science and weakened climate change regulations could mean that costly projects may be vulnerable to damage or, in a worst-case scenario, quickly rendered obsolete by the changing environment.”

That gap would translate into “a whole lot of waste,” said Arizona State University geographer and urban planner Michael Kuby, a contributing author to the U.S. National Climate Assessment. “The impact of not considering climate change when planning infrastructure means you end up building the wrong thing, in the wrong place, to the wrong standards.”

Although Environmental Protection Agency Administrator Scott Pruitt has spent the last year dismantling his agency’s climate programs and denying the reality of climate science, an EPA report last year identified about 6,000 bridges across the U.S. that “face a greater risk of damage in coming decades from the effects of a warming climate,” the Times states. “It provides analysis showing that ‘proactive adaptation’—essentially, planning for global warming before you build—could save the government up to 70% in future costs of repairing damage caused by climate change-driven weather events such as deluges, coastal flooding. and heat waves.”

University of Colorado civil engineering professor Paul Chinowsky agreed with that finding. “Say you’re going to build a new road in Denver that’s designed to last for 25 years,” he told the Times. “What climate science tells us is that, over the next 25 years, the climate in Denver is going to look more like the climate in Albuquerque,” requiring asphalt that can withstand higher heat than Denver has had to cope with in the past. “If you don’t do that,” he said, “It could double the cost of maintenance and the amount of delays on that road.”

He added: “If you think places like Wisconsin, Minnesota, and New England have potholes now, just wait.”

An unidentified White House spokesperson told the Times the Trump team “spent almost a full year formulating his infrastructure plan and all relevant scientific data was considered,” but wouldn’t say whether that data included reports or impact assessments on climate change.