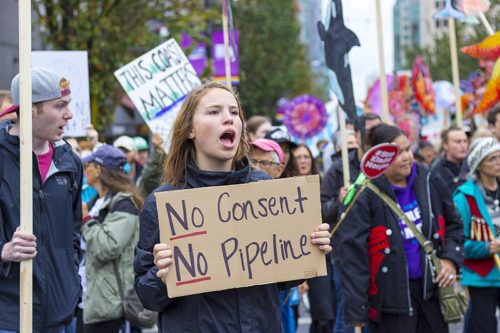 Pushback against the Alberta and federal governments’ defence of the Kinder Morgan pipeline expansion continued late last week, with protesters following Prime Minister Justin Trudeau during a visit to California and the Edmonton-based Parkland Institute calling out the statistics Alberta has published in an effort to justify the project.

Meanwhile, federal officials repeatedly vowed to do whatever it takes to get the pipeline built. with Natural Resources Minister Jim Carr hinting at incentives for British Columbia to drop its opposition to the project, and both Carr and Environment Minister Catherine McKenna insisting they won’t allow the province to block it. “If there is an attempt by any government to infringe on federal jurisdiction in the national interest, then the government of Canada will intervene,” Carr said Thursday.

In San Francisco, about a dozen anti-pipeline demonstrators chanted slogans and held signs outside a downtown hotel room where Trudeau was meeting with California Governor Jerry Brown. “If you want to be a real climate leader, you’re going to have to live up to your Paris agreement and say no to Kinder Morgan, or the communities are going to shut it down,” said protester Vanessa Butterworth of Toronto.

In King County, Washington State, the Safe Energy Leadership Alliance threw its support behind a cross-Canada “buycott” that expressed public support for British Columbia wines, after Notley called a boycott in retaliation for a B.C. scientific study on the impacts of a coastal tar sands/oil sands spill.

The Parkland Institute raised flags about the three major claims in an Alberta government video that had received more than 160,000 Twitter views by the end of last week—that the pipeline would deliver C$18.5 billion for “roads, schools, and hospitals”, 15,000 construction jobs, and 37,000 additional jobs per year.

“There were no sources for the figures cited by the government, but in fairness that’s not unusual for this type of political meme,” writes Parkland Executive Director Ricardo Acuña. “The bigger problem is that none of the three ‘facts’ put out by the Alberta government actually stands up to scrutiny.”

The 15,000 construction jobs are a “total fabrication”, he says, compared to the 2,500 jobs over two years actually estimated by the National Energy Board.

The $18.5 billion is a 20-year estimate of federal and provincial revenues, or just $925 million per year, and would be shared across Alberta, B.C., and federal coffers. [And it assumes the pipeline would actually operate for 20 years, despite crashing fossil demand and tougher carbon controls.—Ed.]

And the 37,000 indirect jobs—actually 34,000, based on a Conference Board of Canada report—“includes a supposed calculation of every single direct, indirect, and induced job resulting from the pipeline itself, from increased bitumen production, from increased tanker traffic, and even from the investment of increased profits and dividends,” Acuña writes. “It’s a stretch at best, but made even less reliable given the degree to which the reduced price of oil and lower profit expectations also impact the job projections, since reduced dividends through lower profits would necessarily mean reduced job creation.”

There’s no indication of whether Alberta’s number includes Kinder Morgan’s 2014 claim to the National Energy Board that the pipeline would create jobs, jobs, jobs—in oil spill response and clean-up.

“Turn that frown upside down, oil-soaked neighbourhood,” U.S. news anchor Rachel Maddow deadpanned at the time. “You can get a job cleaning it up if you just have the right attitude… We’ll make it worth your while. That is seriously what Kinder Morgan is arguing to the freaking Canadian government about why they should be allowed to triple the capacity of their pipeline.”

Responding to a national narrative seeking a “reasonable” way forward that involves allowing the pipeline to be built, climate communicator Jason Mogus is out with an analysis of what a fair compromise might look like.

“The kind of Canada I would be proud to live in would, just like we did in both World Wars, be among the first rich countries to go all in on climate leadership,” Mogus writes. The question is how to get there.

“Canadians, of course, pride ourselves on being fair, middle-of-the-road people,” he notes. “When you lose the centre, you lose Canada. So is there a reasonable, middle way forward on the Kinder Morgan pipeline?”

The answer, he says, means countering a secondary form of denial that accepts the science of climate change, “but then denies (or is overwhelmed by) the implications of what it really means for our economy and way of life.”

Keeping average global warming below 2.0°C will mean leaving most known fossil fuel reserves in the ground, and even that target “would bring hundreds of millions of climate refugees, flood many densely populated coastal areas, bring significantly more extreme weather, and lead to major crop and food security risks,” Mogus notes. “It’s survival, but on a damaged, more precarious world.”

Canadians might yearn for an end to the “pipeline wars” in which “just a little” climate action is enough. But “unfortunately, the time for the kind of change that allowed us to cut a few emissions here while continuing to dig and burn as much as want over there was in the 1980s. It’s 2018, and the math simply doesn’t stack up anymore.”

Mogus acknowledges that Alberta is hurting in a shaky fossil economy. “I for one have come to realize that pocketbook issues matter first, and most, to people,” he writes. “Our movement’s lack of sensitivity to the fate of workers and communities has caused us all a lot of harm.”

But the good news is that “clean energy is now cheaper than fossil fuels, and gets more so by the year,” he says. “It brings better jobs, and lots of them, closer to home.” While “certain asset holders and regions like the oil sands will be losers, in the short term,” Mogus notes that “there will be just as many winners in the clean energy boom.” Which means Canada “could invest our way out of this mess with a Marshall-level plan focused on transitioning Alberta, and make any pain pass very quickly.”