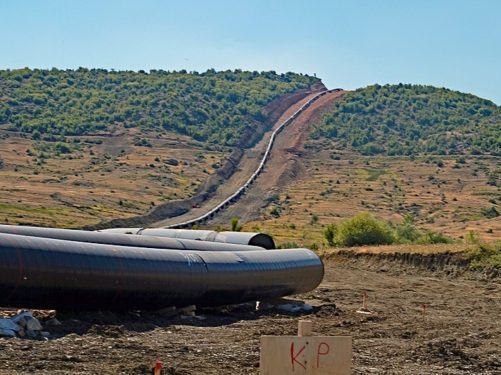 The European Investment Bank is backing the controversial Trans-Adriatic Pipeline (TAP) with its biggest energy loan ever, a €1.5-billion credit that will ease the way for project developers to move natural gas from the Caspian Sea to the Mediterranean.

The decision means “shamelessly locking Europe into decades of fossil fuel dependency even as the window for fossil fuel use is slamming shut,” said Colin Roche of Friends of the Earth Europe. It was the “marquee announcement” in a €6.5-billion energy finance package that also includes green bonds, wind, hydro, energy efficiency finance, and investments in energy poverty reduction, EURACTIV.com reports.

“Opposition to the project has been fierce, as activists have highlighted the impact construction work is already having on local communities,” the online news outlet notes, as well as its incompatibility with the emission reduction goals in the Paris agreement. But “EIB Vice President Andrew McDowell told Reuters the TAP project would help to offset declining European production, providing a diversified source of gas, and displace coal-fired power generation in central and southeastern Europe.”

The line “will form the European leg of the Southern Gas Corridor, a large-scale fossil fuel infrastructure project that will cross the Anatolian plain from Azerbaijan, before cutting through northern Greece, Albania, and making land in southern Italy,” EURACTIV explains. The pipeline is expected to carry 10 billion cubic metres of natural gas from the Shah Deniz 2 field in Azerbaijan, but Russian energy giant Gazprom is already raising flags with its suggestion that it might also make use of the line.

In a study commissioned by the Bankwatch Network and released late last month, ahead of the TAP decision, researchers from the Observatori del Deute en la Globalització and the Polytechnic University of Catalonia conclude that the Southern Gas Corridor could be at least as emissions-intensive as coal, based on emissions thresholds set by the International Energy Agency.

“In more than half of the nine scenarios examined, the level of fugitive emissions of methane, the main component of natural gas and an exceptionally potent greenhouse gas, would mean the Southern Gas Corridor’s climate footprint is comparable to coal power’s or even larger,” Bankwatch notes in a release.

“In five of the scenarios considered by the authors of the new study, the share of unintended releases of methane in the extraction and transmission would range between 2.44 to 5.95%, thus raising the risk of exacerbating, rather than mitigating, climate change,” the organization states. “In addition, the study shows that the annual emissions of the Southern Gas Corridor’s first stage alone would exceed the total emissions of Bulgaria in 2015, or even match Romania’s in that year.”

European Commission officials and some financial institutions have argued the Corridor will help the EU meet its emission reduction targets, Bankwatch adds. But last year, EU Climate Commissioner Miguel Arias Cañete “admitted the Commission has not carried out any climate assessment of what is in fact the largest fossil fuels project the EU is currently pursuing. None of the public banks that are considering financing parts of the Southern Gas Corridor, or that have already provided funding, have publicized any climate assessments of the project.”