Why U.S. Climate Policy Can’t Be Left to the Military 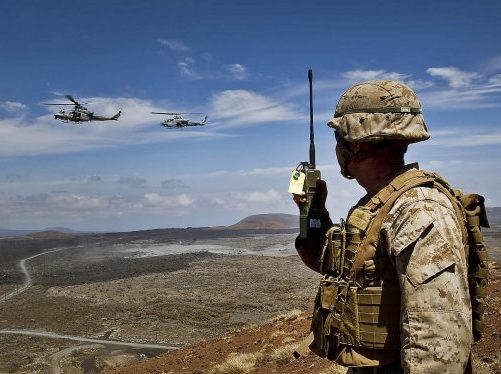 Leaving U.S. climate change strategy up to a Department of Defense (DOD) that is hard-wired to ensure its own survival will prove catastrophic for America, and for the rest of the planet, writes veteran climate columnist David Roberts on Vox.

Such a “dystopian outcome” could be the ultimate, tragic endpoint of Donald Trump’s climate denial, he warns, because even if DOD is toning down its official reports, climate change remains on its radar as a clear and present danger.

“Unlike its Commander in Chief, [the military] is not involved in a reality show,” he notes. “It has to deal with actual reality.”

Citing retired admiral James Stavridis, now dean of the Tufts University Fletcher School of Law and Diplomacy, Roberts says that reality is daunting: water scarcity “will drive dislocation and conflict”, naval bases will be threatened by rising sea levels, a melting Arctic will “open new areas of geopolitical conflict”, and the military budget will be strained by “the rising cost of climate impacts”.

It isn’t that concern about climate change is anything new for the military: Trump Defense Secretary James Mattis, who fought in the Iraq War and has since been an outspoken advocate for weaning the U.S. military off fossil fuels, warned the Senate Armed Services Committee that “climate change is impacting stability in areas of the world where our troops are operating today.” Such comments, Roberts notes, have “led some to view Mattis, and by extension the DOD, as the lone ‘green hope’ in the Trump administration.”

But that optimism is misplaced, he says: while some may be looking to the military to show leadership on mitigation, the armed forces are “overwhelmingly focused on adaptation—preparing for the changes on the way, maintaining readiness, and allocating resources accordingly.” That’s “as it should be,” Roberts contends, because “the military is not the right tool for mitigation, for economy-wide decarbonization.”

That “right tool,” he adds, would be an administration that recognized climate change as an existential threat to the present and future of the American people and understood that “mitigation protects everyone (at least to some extent), while adaptation only protects those who adapt.”

That the Trump administration is AWOL on climate action means that “an all-adaptation, no-mitigation climate approach” may increasingly dictate American responses to climate change. Such a situation may well appeal, Roberts notes, to “the sort of conservative who mistakes callous myopia for realpolitik.” That’s because “with all its advantages…America could prosper in an increasingly chaotic world, at least for a while.”

But in the long term, “as things get worse, those who can afford to protect themselves—move their military bases, build sea walls and desalination plants, claim newly navigable land in the Arctic—will pull farther and farther away from those who can’t (the global poor, who did so little to cause the problem),” he notes. In the end, “such a strategy would be disastrous, dramatically and continuously exacerbating existing inequalities.