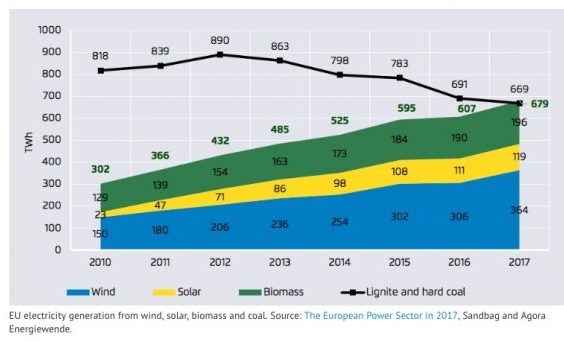 For the first time last year, renewable energy delivered more electricity in Europe than coal, according to a new study by Agora Energiewende and UK think tank Sandbag.

Wind, solar, and biomass accounted for more than 30% of the continent’s power production last year, with Germany and the United Kingdom contributing 56% of the renewables growth between 2014 and 2017.

Last year’s result was led by “good wind conditions and huge investment into wind energy,” RenewEconomy reports. It represented a sudden and startling fall for coal, which produced more than twice as much electricity as the three renewable sources combined as recently as 2012.

“EU renewables growth has been increasingly reliant on the success story of wind in Germany, the UK, and Denmark, which has been inspiring,” said Matthias Buck, Agora Energiewende’s director of European energy policy. “If all countries in Europe engage in this, 35% renewable energy by 2030 is entirely possible.”

Even so, Sandbag energy analyst Dave Jones said the EU will have to legislate a coal phaseout if it hopes to hit the long-term Paris agreement goal of limiting average global warming to 1.5°C.

“We need a fast and complete coal phaseout in Europe,” the think tank stressed. “The thought of charging electric cars in the 2030s with coal just doesn’t compute.”