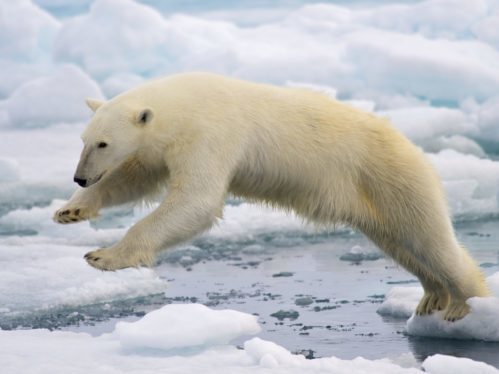 New research is showing that polar bears need many more calories than previously thought to survive, just as dwindling Arctic sea ice forces them to range more widely and makes them less able to catch their favourite seal prey.

In a recent study of Beaufort Sea polar bears, researchers spent parts of three consecutive Aprils between 2014 and 2016 tracking nine female bears equipped with GPS cameras and a “polar bear’s version of a Fit Bit,” InsideClimate News reports. They discovered that the “bears’ metabolism was 1.6 times higher than previously thought”.

Published last week in the journal Science, and based on extensive video footage, the study allowed researchers to see for the first time “how successful [the bears] are on hunts and how much time they spend walking, swimming or resting.” That methodology secured “some quantitative information on how much they need to be catching just to meet their energy demands,” said lead author Anthony Pagano.

The answer is, “a great deal,” ICN notes, adding that “Pagano and his co-authors observed an average loss of 1% of body mass each day during their study, and some of the bears lost some 10% of their body mass during as many days.”

While May and June are the months when the bears really need to take on weight to survive leaner times ahead, the rapid daily losses in body mass during April are still concerning. That’s partly because the southern Beaufort Sea ice “has been breaking up earlier each spring and re-forming later each fall,” ICN notes. Compounding the problem, says Pagano, is that “when the ice breaks up, it moves hundreds of kilometres farther north than it did historically…and the majority of the bears in that region stay on the ice, traveling farther from shore before migrating back in the fall.”