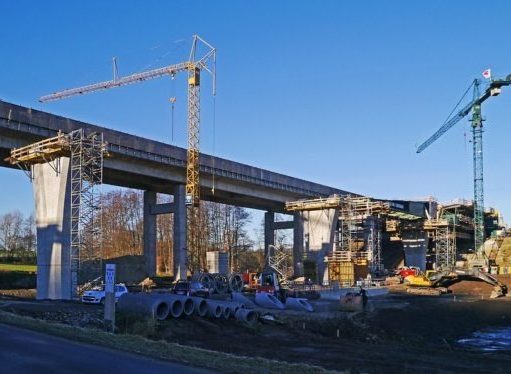 Nearly a dozen bedrock environmental laws are expected to be early casualties of a national infrastructure program that Donald Trump laid out in his State of the Union address last night, leading to predictions that states and cities will be plunged into a “‘Hunger Games’-style fight” to grab their share of an underfunded federal program.

“Tonight, I am calling on the Congress to produce a bill that generates at least US$1.5 trillion for the new infrastructure investment we need,” Trump said. “I am asking both parties to come together to give us the safe, fast, reliable, and modern infrastructure our economy needs and our people deserve.”

He added that “every federal dollar should be leveraged by partnering with State and local governments and, where appropriate, tapping into private sector investment,” stressing that “any bill must also streamline the permitting and approval process” for major infrastructure work.

In the lead-up to the speech, the Washington Post obtained a version of a White House proposal to scale back key environmental requirements for infrastructure projects. While a staffer described the document as a “discussion draft”, the Post said it was being used as a basis for negotiations with lawmakers.

“The plan would change things such as how officials decide a pipeline route, how a proposed border wall with Mexico would be built, and whether the National Park Service could object to a development that would impair tourists’ views from scenic parks such as the Grand Canyon,” the Post revealed.

The Center for American Progress warned that the plan “would require fundamental changes to no fewer than 10 bedrock environmental laws that protect the nation’s clean air, clean water, wildlife, and national parks. The plan would hollow out the National Environmental Policy Act (NEPA), the law that requires federal project sponsors to consult with stakeholders who would be affected by new projects and identify ways to reduce their impact on the environment, public health, and cultural resources. The Endangered Species Act is also in the crosshairs, as several provisions would prioritize new development over the protection of wildlife that is on the brink of extinction.”

Trump is also proposing “significant changes to the Clean Air Act and Clean Water Act to make it easier for corporations to break ground and avoid inconvenient air and water quality protections,” CAP added. “The proposal even includes some mystifying provisions, such as one to give Secretary of the Interior Ryan Zinke unilateral authority to site natural gas pipelines in national parks.”

While Alex Herrgott, associate director of infrastructure at the White House Council on Environmental Quality, claimed that “we have no intention of eroding environmental protections,” early reactions underscored differences between infrastructure builders and advocates and organizations concerned about the country’s natural capital.

“Clearly, they are trying to get these things built more quickly,” said Nick Goldstein, vice president of regulatory and legal issues at the American Road & Transportation Builders Association. “That can be done while maintaining the necessary environmental protections, because a lot of what holds this up is needless, duplicative review.”

“The administration’s legislative outline for infrastructure sacrifices clean air, water, the expertise of career agency staff, and bedrock environmental laws,” countered Theresa Pierno, president and CEO of the National Parks Conservation Association. “The proposal reveals that this administration is not serious about restoring America’s infrastructure.”

On one hand, “the White House plan identifies many aspects of the current permitting process that lead to delays, including the fact that multiple agencies often weigh in on the same permit and that the federal government lacks resources to assess projects in a timely manner,” the Post states. On the other, “new limits and deadlines would be imposed on federal agencies reviewing projects, and in some cases, agencies—especially the Environmental Protection Agency—could be limited in their ability to weigh in on the permitting process.”

Beyond that, “in several instances, the plan limits the extent to which the EPA can weigh in or block a project from going forward. In doing so, it could allow one particularly aggressive, pro-development corner of the federal bureaucracy,” Zinke’s Interior Department, “to set a standard for the government as a whole.”

While Trump has repeatedly touted his infrastructure plan as a $1-trillion initiative—boosted to at least $1.5 trillion in the State of the Union speech—it’s been increasingly clear that the White House plans to contribute about $200 billion of that total over 10 years.

““Instead of the grand, New Deal-style public works program that Trump’s eye-popping price tag implies, Democratic lawmakers and mayors fear the plan would set up a vicious, zero-sum scramble for a relatively meager amount of federal cash,” POLITICO reports. That dynamic would force cash-starved cities and states “to scrounge up more of their own money,” while “shredding regulations in the name of building projects faster.”