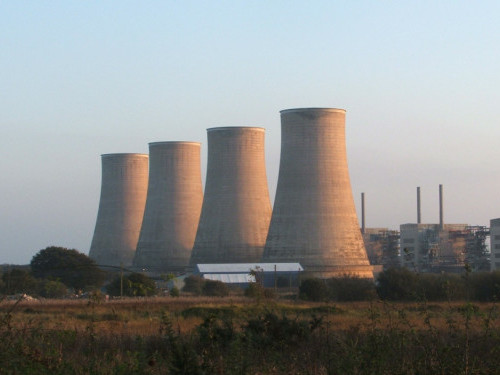 Can a true climate hawk learn to love a nuclear power plant? Or if not, at least tolerate it? Veteran climate reporter David Roberts puts that provocative question forward in a recent column on Vox.

Roberts’ premise is one that no climate hawk—and no candid reader of the science—can deny: human disruption of the stable climate that allowed humanity to emerge now threatens our species’ future survival. “Serious damages are already under way, there’s enough carbon dioxide in the atmosphere to ensure more damages to come, and if carbon emissions continue unchecked, species-threatening damages become a non-trivial risk,” he writes.

“Existential” threats are those that put every other kind in the shade, he adds: If we don’t solve them, we won’t have to worry about the others. But Roberts contends that many self-styled climate hawks—and less hawkish supporters of climate action in the broader environmental community—too often lose sight of that priority.

As his lead example, he cites a debate currently raging in New England, where the Pilgrim Nuclear Power Plant—the last operating nuclear station in Massachusetts—is set to close next year.

The Massachusetts chapter of the Sierra Club—a group that explicitly recognizes climate change as an “existential” threat—welcomed the decision, after lobbying for the plant’s closure, Roberts notes.

But the shutdown will leave a 690-megawatt hole in New England’s power supply, about 4.1% of the total. One way to fill it would be to complete a proposed transmission line to import hydro power from Quebec.

“That would replace the lost Pilgrim energy and add more carbon-free energy to boot,” Roberts observes. But Sierra Club Massachusetts “opposes that, too,” citing “ecological destruction on a massive scale” and “exploitation of the Indigenous people of Canada.”

Roberts’ nuclear example may wander into some deep grass. While the Pilgrim nuclear plant churns out zero-carbon electricity now, it’s not clear that his comparisons include the inevitable cost of decommissioning the station. His assertions that even if New England “was covered in solar panels, that energy would be replacing the energy lost from Pilgrim, [and] would have to be backed up by lots of natural gas (or oil),” appear casual in the first case, and in the second strangely dismissive of the tumbling cost of utility-scale renewables+storage.

“Yesterday’s announcement of a deal for 17% of Massachusetts’ electricity for 20 years makes it hard to agree with Roberts that there is an impasse between climate objectives and environmental positions”, Sierra Club’s Ohio-based energy advisor Ned Ford told The Mix, in an e-mail response to the Vox post. Sierra Club has long opposed expansion of hydro, he added, but “New England environmentalists have been working on RGGI [the Regional Greenhouse Gas Initiative] for some years now, and the conflicts are real, but hardly insurmountable.”

The region “does have adequate wind and solar resources to provide all the power they need, at or below current costs,” Ford added. “It may be that Quebec hydropower is cheaper, but those power lines are going to be expensive. Wind and solar will need transmission, too, but it is unlikely that they will need as large lines for nearly as many miles.”

Ford also pointed to an issue he says Roberts is sidestepping: That keeping a nuclear power plant in operation leads to higher costs. “FirstEnergy in Ohio is seeking a $200-million-per-year increase in rates,” or about five to 10% on power bills, to cover “a much larger proportional increase in the cost of the nuclear resource,” he said.

Still, Roberts’ broader argument bears reflection. If zero-carbon electrification is to be achieved at all—let alone on the urgent schedule implied by the onset of climate instability—transmission corridors from regions of surplus production to those of high demand may be “existential” necessities.

“By doing so they are deceiving themselves. There are trade-offs among priorities, and eschewing 9.45 terawatt-hours of carbon-free energy is a big-ass trade-off.”

There are good arguments against building additional nuclear stations, Roberts concedes. “But it is difficult to think of a plausible climate-based argument against the ones that are already built, running, and paid off. They are generating carbon-free power, and we need all the carbon-free power we can get.”

He adds that “the wealthy developed world is filled with liberals and environmentalists who are perfectly willing to drive a Prius and buy organic veggies but raise holy hell if anyone tries to build a bike lane, light rail station, or new housing anywhere near them. It’s one thing to go to the occasional march, but giving up on-street parking? Let’s be serious.”

For climate advocates of all stripes, Roberts sees tough choices ahead.