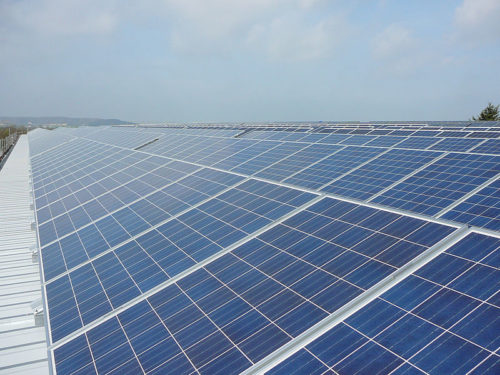 The big beneficiaries of Donald Trump’s new tariff on imported solar products will not be the domestic manufacturers the administration claims to be protecting, but a group of investment houses around the globe that backed those companies in the first place, according to Bloomberg Markets.

“The firms—from Centerbridge Partners LLP to JPMorgan Chase & Co.—all are creditors to the two struggling solar companies that brought the trade complaint,” Bloomberg reports. “The value of their investments, mostly in the form of distressed bonds, is likely to get a boost as the new tariffs help American manufacturers.”

So “while much of the U.S. solar industry has blasted the tariffs, warning of massive job losses, these investors show at least some on Wall Street stand to gain.

SQN Capital Management backed the tariff after lending $50 million to Suniva Inc., the Chinese-owned company that filed for bankruptcy in April, then went on to initiate the tariff campaign.

Centerbridge, which manages US$14 billion in business loans and “distressed assets”, holds about one-third of the secured credit in SolarWorld AG, a German company that declared bankruptcy in May. SolarWorld AG owns SolarWorld Americas, one of the other leaders of the tariff effort.

“Other firms that are creditors to SolarWorld include Marathon Asset Management LP and Bank of America’s Merrill Lynch International,” Bloomberg notes, citing documents related to the bankruptcy. The news agency notes that investors could benefit if the two companies are eventually sold, and creditors “could gain further from a long-discussed global deal that would settle several solar trade disputes. Such a settlement—a long shot—could include divvying up an estimated $1.5 billion in already-collected tariffs held by the U.S. government.”

All of which suggests the tariffs “may be about boosting the value of the assets before liquidating them,” said Bloomberg New Energy Finance analyst Hugh Bromley. But Bloomberg Markets says a U.S. manufacturing revival is unlikely in a market led by China, “home to fertile tech communities that manufacture and assemble solar panels, dragging prices down for solar modules—and helping spur a global clean power boom.”

While the U.S. industry begins adapting to the new tariff, most analysts are fairly sanguine about its impact. “The global solar industry will adjust,” said International Energy Agency Executive Director Fatih Birol, on the sidelines of last week’s World Energy Forum in Davos, Switzerland, and “I don’t believe this decision will reverse the solar expansion in the U.S.”

Germany’s SMA Solar, the world’s biggest manufacturer of solar inverters, is still forecasting 18% growth for the Americas through 2020, nearly double the 10% it anticipates globally. “SMA’s market outlook includes a slightly negative impact from the import tariff,” the company stated in an investor presentation.

Bloomberg New Energy Finance concluded that the tariff “may add 10% to the cost of a utility-scale solar farm in the U.S. and about 4% to rooftop units bought for homes,” Bloomberg News reports. MJ Shiao, head of Americas research at GTM Research, said the tariffs as announced would increase the cost of imported solar modules by 10 to 12¢ per watt, from a starting point of 35 to 40¢, sufficient to slow the market by 8.3%, or 11% over five years.

But those losses were still  enough to trigger continuing alarm with the U.S. Solar Energy Industries Association, which had mounted an all-out campaign against the tariff.

“While tariffs in this case will not create adequate cell or module manufacturing to meet U.S. demand, or keep foreign-owned Suniva and SolarWorld afloat, they will create a crisis in a part of our economy that has been thriving, which will ultimately cost tens of thousands of hard-working, blue-collar Americans their jobs,” said President and CEO Abigail Ross Hopper.

“The petitioners in this case—both bankrupt firms that are majority foreign-owned—employ about 1,000 Americans, while the rest of the domestic industry employs more than 260,000 Americans up the entire value chain,” agreed R Street Trade Policy Counsel Clark Packard. “More good-paying jobs will be jeopardized by today’s decision than could possibly be saved by bailing out the bankrupt companies that petitioned for protection,” and the tariff “also will jeopardize the environment by making clean energy sources less affordable.”