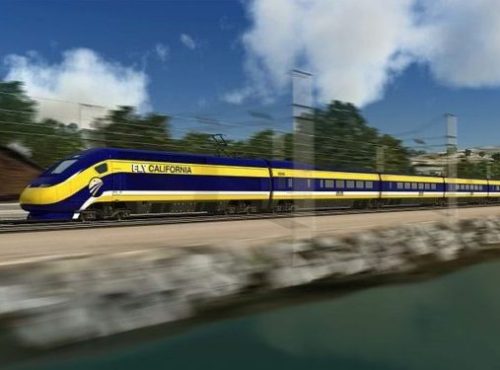 “I make no bones about it: I like trains, and I like high-speed trains even better,” Brown stated. “Government does what individuals can’t do, like build roads and bridges and support local bus and light rail systems. This is our common endeavour [for] which we pool our resources through the public sector and improve all of our lives.”

While Brown’s speech chronicled his state’s achievements with carbon cap and trade, electric vehicle targets, appliance efficiency standards, and a 50% renewable energy target for 2030, Greentech Media points to electrified high-speed rail as “one especially glaring project [that] remains on the agenda”. The 800-mile, US$60-billion project was approved in a 2008 ballot measure, and if it’s ever completed, it will run completely on low-carbon energy. But the plan “has already been snagged by a series of budget overruns, delays, legal challenges, and federal grant complications,” Greentech notes.

But Brown was undeterred. “Our economy, the sixth-largest in the world, depends on mobility, which only a modern and efficient transportation system provides,” he told his audience. He added that the train “will be fast, quiet, and powered by renewable electricity, and last for 100 years—after all of you are gone.”

With the state’s motorists already logging 330 billion miles per year, high-speed rail also “forms a key component of California’s ambitious climate goals,” Greentech states. “If the rail project goes through, the state claims it will reduce trips by 10 million miles per day. In the first 58 years of operation, auto travel will decline by more than 400 billion miles. Puddle-jumper flights between the state’s urban hubs could fall annually by a total of 93 to 171 flights starting in 2030.”

The day after his Wednesday address, Brown signed an executive order setting a target of five million zero-emission vehicles (ZEVs) by 2030, along with an eight-year, $2.5-billion initiative to install 250,000 new vehicle charging stations and 200 hydrogen fueling locations across California by 2025.