Weaver Threatens to Vote Down B.C. Government Over LNG Plans 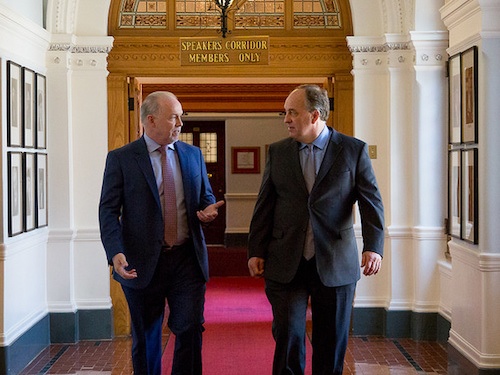 “Lest there be any doubt, let me be perfectly clear: NDP government will fall in non-confidence if after all that has happened it continues to pursue LNG folly,” Weaver tweeted.

“The reason why we agreed to the CASA agreement with the NDP is their supposed commitment to GHG reduction,” he added in a separate tweet. “A push for #LNG means they are not serious. We are willing to let BC voters have their say. We would have been deceived.”

Tensions ratcheted up after Horgan told a Vancouver Sun writer “that while in Asia later this month, he will confirm his openness to a proposed LNG export terminal in Kitimat, B.C., proposed by Royal Dutch Shell in partnership with Chinese, Japanese, and Korean investors,” CBC reports. “Shell says it will proceed with B.C. energy plans despite political uncertainty.”

A B.C. Greens spokesperson said the party would negotiate with the NDP before initiating a non-confidence motion, but is concerned with positioning the province to meet its emission targets.

B.C. Environment Minister George Heyman said he wanted to talk to Weaver “about how the province can tackle GHG reductions while still pursuing LNG,” the Globe and Mail reports. “The Premier is talking to people about LNG development. He has always been clear that our government is interested in that,” Heyman said. “What Andrew Weaver and I should discuss is what our government’s overall climate action plan looks like and what our proposals are that we are developing to reduce emissions across industry, across transportation, and across buildings and homes.”

The province is “in this mess because under [former Premier] Christy Clark, emissions went up,” said Heyman, a former executive director of Sierra Club BC. “The case I would make to Mr. Weaver is, ‘Let’s work together on an overall plan that would bring emissions down.'”

But Sierra Club climate campaigner Jens Wieting had a different view in a Thursday news release. “If LNG Canada goes ahead, it alone could account for more than three-quarters of B.C.’s allowable emissions in 2050,” he said. “No matter what government is in power, exporting liquefied fracked gas to Asia will make it impossible for B.C. to meet our legislated climate targets; the math simply doesn’t add up.”

In a speech to 900 participants at a natural gas forum in Prince George, “Horgan presented himself Wednesday as a champion of B.C.’s resource industry, while acknowledging his party’s dependence on the Greens to maintain the ability to govern,” CBC notes. “Horgan said he was measuring his time as premier in ‘weeks’ because of his position as leader of a minority government, and promised to communicate the importance of the resource industry, including natural gas, to both voters in urban centres and to foreign leaders” during his trip to Asia.