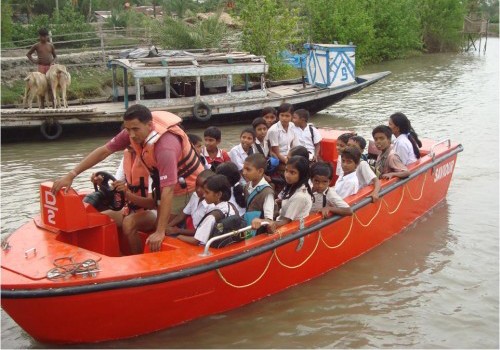 Forced migration and forced marriage are two of the signature impacts of sea level rise and increased cyclone activity that come through loud and clear in a dispatch from Bangladesh by New York Times international columnist Nicholas Kristof.

The Bangladeshi island of Kutubdia is home to about 100,000 people, but it’s gradually disappearing, Kristof reports, with a shoreline that has shrunk by about a kilometre since the 1960s. “Already much of Kutubdia has been swallowed by rising seas, leaving countless families with nothing,” he writes.

“Even when land is mostly dry, occasional high tides or storm surges bring in saltwater that poisons the rice paddies. Thousands of climate refugees have already fled Kutubdia and formed their own neighbourhood in the mainland Bangladeshi city of Cox’s Bazaar.”

Kristof quotes Nurul Haque, a farmer who “lost all his land to the ocean”, and now has to confront the possibility of withdrawing his 13-year-old daughter, Munni, from eighth grade and marrying her off to an older man looking for a second or third wife.

“I don’t really want to marry her off, because it’s not good for girls,” he said, “but I’m considering it.” Kristof said Haque “insisted that if it weren’t for the rising waters and his resulting impoverishment, he wouldn’t think of finding a husband for her.”

The United Nations Children’s Fund (UNICEF) estimates that 22% of girls in Bangladesh marry by age 15, and Kristof cites an academic study that links an increase in forced marriages to climate change.

“Climate change is destroying children’s futures,” said UNICEF Deputy Executive Director Justin Forsyth. “In Bangladesh, tens of millions of children and families are at risk of losing their homes, their land, and their livelihoods from rising sea levels, flooding, and increased cyclone intensity,” in a country whose per capita greenhouse gas emissions are just one-tenth the global average.

Kristof paints a similarly devastating picture in countries ranging from Madagascar to Malawi, Mozambique to Nigeria, and the continuum of impacts includes war.

“Climate change contributes to conflict,” said Mercy Corps CEO Neal Keny-Guyer. “He observed that a drier climate is widely believed to have caused agricultural failures, tensions, and migrations that played a role in the Syrian civil war, the Darfur genocide, and the civil war in northeastern Nigeria,” Kristof notes.

Beyond reducing their outsized carbon emissions, countries in the industrialized north “can do much more to build resilience in poor countries,” he writes. “That can include supporting drought-resistant or saltwater-resistant crops, and offering microinsurance to farmers and herdsmen so that a drought does not devastate them. Mercy Corps is now developing such microinsurance.”

But that support might also hinge on a shift in attitude and focus.

“Americans were recently horrified by a viral video of a starving polar bear, whose condition may or may not be linked to climate change,” Kristof writes. “Let’s hope we can be just as indignant about the impact of climate change on children like Munni.”