Montreal’s Beaver Lake to Close Permanently Due to High Temperatures 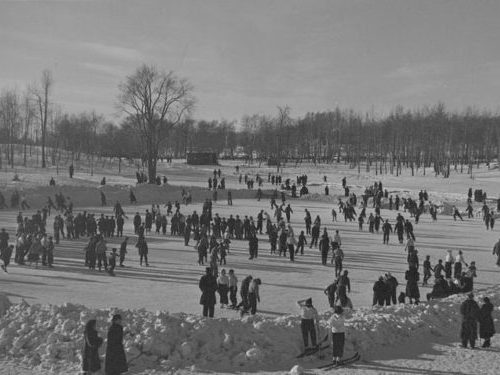 Conrad Poirier/National Library and Archives of Quebec via Wikimedia Commons

Montreal is on the verge of permanently closing the Beaver Lake skating rink in Mount Royal Park, after concluding that fluctuating temperatures make it unsafe for users and city work crews.

The lake, designed in 1930 by Canada’s first landscape architect, Frederick Todd, was only open to skaters for 37 days last year, compared to about 100 days in years past, city executive committee member Luc Ferrandez told CBC. Skaters will now be directed to a smaller, refrigerated rink nearby.

Les Amis de la Montagne (Friends of the Mountain) spokesperson Hélène Panaïoti said she’s still hoping the city can find a way to keep the lake open, possibly by lowering water levels during the winter months. “The current Beaver Lake is deeper than the original,” CBC notes, “which means it needs to be colder for the ice to be solid enough to skate on.”

On Thursday, Mayor Valérie Plante said she and Premier Philippe Couillard both remembered skating on the lake as children [it was my favourite park, too! – Ed.], and offered a glimmer of hope the storied rink might be saved. But she and Ferrandez both said safety has to come first.

“We will be trying to find solutions. But I don’t want to raise hopes too high, because it’s complex,” Plante said. “We need to make sure there are no accidents there. It’s not an easy one, because it’s really about security.”

“We don’t want to lose a citizen,” Ferrandez agreed.