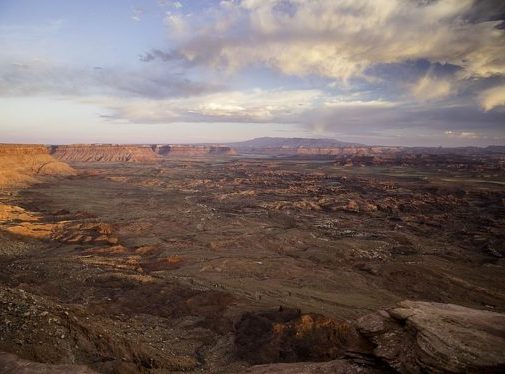 US Bureau of Land Management/Wikimedia Commons

A Canadian mining company was instrumental in lobbying the Trump administration to open the Bears Ears National Monument in Utah to uranium mining, the New York Times reports.

When it was designated by President Barack Obama in December 2016, the national monument protected 547,074 hectares of arid land marked by two prominent mesas—the bear’s “ears” of Indigenous legend. In December 2017, the Trump administration withdrew protection from more than 85% of the area, effective next month.

“The vast majority” of more than 300 legacy uranium mining claims located inside the monument’s original boundaries now happen to “fall neatly outside the new boundaries of Bears Ears set by the administration,” the Times reports.

About a third of those are linked through a subsidiary to Toronto-based uranium producer Energy Fuels, the paper adds, citing its examination of U.S. Bureau of Land Management records. The company was “a notable presence” in industry lobbying directed last year at U.S. Interior Secretary Ryan Zinke to shrink the Bear’s Ears monument.

Zinke visited the Utah monument shortly after he was appointed. There, First Energy executives “openly lobbied for shrinking Bears Ears’ borders, handing out [a] map that marked the pockets the company wanted removed: areas adjacent to its White Mesa Mill, just to the east of the monument, and its Daneros Mine, which it is developing just to the west.”

Two weeks after the visit, Energy Fuels wrote Zinke’s department that uranium deposits inside the monument’s boundary “could provide valuable energy and mineral resources in the future,” and urged him to withdraw protected-area designation from the industry’s “existing or future operations”.

“Zinke has insisted that mining played no role in the decision to shrink Bears Ears,” the Times notes. But Trump, in ordering his interior secretary to review the Obama-era designation, had claimed protection might “create barriers to achieving energy independence”.

First Energy is also developing a uranium mine six miles from the Grand Canyon’s South Rim in Arizona. Since excavation began on a 1,500-foot production shaft, unanticipated encounters with groundwater have released uranium-contaminated water to the surface, the Times reports.

Meanwhile, of some 500 mineshafts sunk in the area of the Bears Ears in the 1950s and 1960s to support the United States’ drive for nuclear superpower status, “all but a few still await cleanup,” the Times observes.