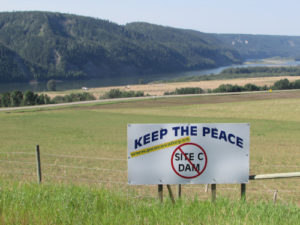 In a civil suit launched yesterday before the Supreme Court of British Columbia, two First Nations are contending that hydroelectric dams on the Peace River, including the recently-approved Site C project, unjustifiably infringe on their constitutionally protected rights under Treaty 8.

“The cumulative impact of the Bennett, Peace Canyon, and Site C dams is to turn the Peace River into a series of reservoirs, destroying the unique cultural and ecological character of the Peace, severing the physical, practical, cultural, and spiritual connection the Prophet have with the Peace, and infringing treaty rights,” the West Moberly and Prophet River First Nations state. The suit asks the court to rule that the province’s approval of Site C was “unconstitutional, void, and of no force and effect”.

Lawyer Tim Thielmann of Sage Legal says the communities are not seeking financial compensation at this time because “we don’t believe the project is past the point of no return.” Instead, “we believe the balance of convenience, which the judge will have to weigh, favours the granting of an injunction to suspend all work on the project.”

DeSmog traces the history of the communities’ legal fight against Site C, noting that they are now seeking disclosure of project documents from the province and BC Hydro that have been withheld until now.

“We are fighting for the land and the preservation of the Dunne-za way of life,” said West Moberly Chief Roland Willson. “But we are also fighting for values all British Columbians share, like transparency and economic prudence.”

“We’re not just asking the court to save the Peace River valley, but to save British Columbians billions of dollars by scrapping this ill-conceived, outmoded, and unneeded boondoggle unravelling in plain sight,” agreed Prophet River Chief Lynette Tsakoza.