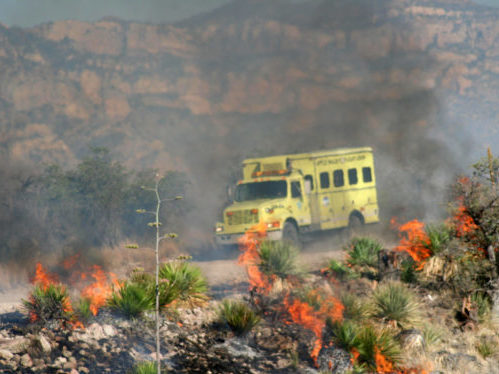 With a climate-driven increase in wildfires breaching urban and suburban boundaries more often, a rising toll of burning structures is adding a disturbing spike in toxic compounds to the air in affected regions. And much of it can be traced to ubiquitous carpeting.

The “unprecedented wildfires that ravaged Northern California” late last year “destroyed more than 8,500 buildings and homes, many of which were filled with products that contain toxic chemicals,” two advocates for less-toxic furnishings write in the San Francisco Chronicle.

As last year’s fires swept through one subdivision after another, write Jim Vallette, Research Director for the Healthy Building Network, and Monica Wilson, Associate Director of the U.S. office of the Global Alliance for Incinerator Alternatives, smoke from burning homes released “the worst air pollution ever recorded” in the area.

“Carpets and foam carpet pads are among the most significant sources of toxic chemicals in indoor environments,” the pair observe. “When carpet and other plastic building materials burn, some of the deadliest substances on Earth are released into the air.”

Citing a study by Vallette’s network, they write that nearly four dozen chemicals “common in carpets are known to cause respiratory disease, heart attacks, strokes, asthma, and immune and developmental health problems in children.”

As climate change contributes to an increase in wildfires, human settlement patterns—and the attraction of semi-rural living—have expanded the “interface” zones where flammable forests and flammable homes intermingle. California’s 2017 wildfire season ran from summer to Christmas.

In 2016, all 80,000 residents of Fort McMurray were forced to abandon their homes to out-of-control flames; scores of homes and businesses burned. And last year in British Columbia, a dozen major fires and as many as 300 smaller ones threatened scores of municipalities and Indigenous communities, forcing evacuations of more than 14,000 people.

Wilson and Vallette say carpet manufacturers and retailers are making efforts to reduce the toxic contents of the products, but there are tradeoffs. San Francisco, for example, is rewriting purchasing policies to remove heavy metals and other toxic chemicals from the furniture and carpets it buys—at the potential cost of stain resistance and flame retardant qualities.

But meanwhile, houses already built and furnished are fully stocked with legacy toxins ready to be released by fire.