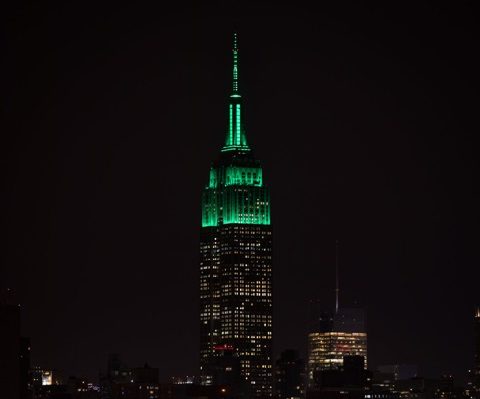 The Empire State Building lit up in green Wednesday evening, after New York Mayor Bill de Blasio announced his city would sue five of the world’s biggest fossil companies for their contribution to the impacts of climate change.

New York also set a five-year deadline for its five pension funds, with total holdings worth US$189 billion, to dump the $5 billion in investments they hold in fossil energy stocks. “New York City is standing up for future generations by becoming the first major U.S. city to divest our pension funds from fossil fuels,” de Blasio said.

In a news conference Wednesday, the mayor described Hurricane Sandy in October, 2012 as “a tragedy wrought by the actions of the fossil fuel companies”, leaving 44 dead and $19 billion in damage.

“The city of New York is taking on these five giants because they are the central actors, they are the first ones responsible for this crisis and they should not get away with it anymore,” he said. “We’re going after those who have profited. And what a horrible, disgusting way to profit — the way it puts so many people’s lives in danger.”

Court documents point to flooding and erosion New York has already experienced due to climate change, as well as the future threats the city can anticipate, and name BP, ExxonMobil, Chevron, ConocoPhillips, and Shell as respondents. “In this litigation, the City seeks to shift the costs of protecting the City from climate change impacts back onto the companies that have done nearly all they could to create this existential threat,” the lawsuit states.

The suit puts the cost of protecting New York’s coastlines, infrastructure, and citizens from climate impacts in the billions of dollars, the Washington Post notes. “To deal with what the future will inevitably bring, the City must build sea walls, levees, dunes, and other coastal armament, and elevate and harden a vast array of City-owned structures, properties, and parks along its coastline,” the document states. “The costs of these largely unfunded projects run to many billions of dollars and far exceed the City’s resources.”

The Guardian adds that the suit “echoes a similar effort on the west coast, where two California counties and a city [other reports put the total at 7—Ed.] are suing 37 fossil fuel companies for knowingly emitting dangerous levels of greenhouse gases.”

350.org co-founder said the announcement makes New York a “capital of the fight against climate change on this planet.” He added that, “with its communities exceptionally vulnerable to a rising sea, the city is showing the spirit for which it’s famous—it’s not pretending that working with the fossil fuel companies will somehow save the day, but instead standing up to them, in the financial markets and in court.”

Former UN climate secretary Christine Figueres called the decision “extremely encouraging”, noting that “the exponential transition toward a fossil fuel-free economy is unstoppable, and local governments have a critical role to play.”

“I think the significant development here is that this is the first of these cases in this last year that’s filed outside of California,” said Michael Burger, director of Columbia University’s Sabin Center for Climate Change Law. With more widely-dispersed local legal action, “we might be able to see adequate pressure applied to these companies to inspire action on climate change,” he told the Post.

“The leadership of New York City, San Francisco, and other U.S. local governments is an important challenge to Canadian local and provincial governments,” said staff lawyer Andrew Gage. “How long are you going to pass the costs of climate change onto your taxpayers without demanding accountability from an industry that has benefited so much—and played such a large role—in causing climate change?”

On the Exxon blog, the company’s vice president of public and government affairs, Suzanne McCarron, said it “welcomes any well-meaning and good faith attempt” to address climate change. But “lawsuits of this kind—filed by trial attorneys against an industry that provides products we all rely upon to power the economy and enable our domestic life—simply do not do that.”

Chevron spokesperson Brad Reddall called the suit “factually and legally meritless” in an email to the Post, adding that it “will do nothing to address the serious issue of climate change. Reducing greenhouse gas emissions is a global issue that requires global engagement. Should this litigation proceed, it will only serve special interests at the expense of broader policy, regulatory, and economic priorities.”