17 Dead, 40 Missing After Mudslides Leave Montecito ‘Like a WW1 Battlefield’ 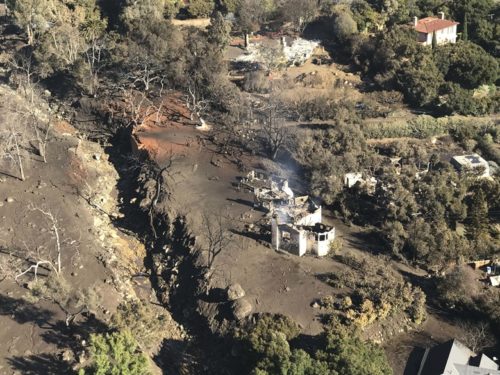 Rescuers in the luxury community of Montecito, California were “searching for a miracle” yesterday, more than two days after mudslides killed 17 people, left more than 40 missing, and left the wildfire-ravaged community looking “like a World War One battlefield”.

“Crews from the Coast Guard and the National Guard joined the hunt along coastal hills previously devastated by wildfires—which left the slopes barren and unable to hold onto tons of soil and rocks dislodged by downpours,” the Washington Post reports.

“In disaster circumstances, there have been many miraculous stories lasting many days, and we certainly are searching for a miracle right now,” said Santa Barbara County Sheriff Bill Brown. “These were people that were sheltered in place that had needs that just took a while to get to some of them,” added Fire Captain Gary Pitney. “They were OK but they wanted to get out.”

But by now, Pitney conceded, “the likelihood is increasing that we’ll be finding bodies, not survivors. You have to start accepting the reality of that.”

“The mudslide, touched off by heavy rain, took many homeowners by surprise early Tuesday, despite warnings issued days in advance that mudslides were possible because recent wildfires had stripped hillsides of vegetation that normally holds soil in place,” AP reports. “As the rainwater made its way downhill with gathering force, it pried boulders from the ground and picked up trees and other debris that flattened homes, cars, and carried at least one body a mile away.”

Grist traces a longer chain of events contributing to the killer conditions, noting that “a chain of weather-related disasters in California created the conditions that led to the mudslides. There was the four-year drought, followed by rains so heavy that officials had to evacuate an entire town beneath an eroding spillway. A flush of new plant growth burst out across the state after the rain—but green turned quickly to brown as summer baked the vegetation into tinder.”

After that, “the last nine months were hotter and drier in Southern California than they’d been in over a century. Add a spark and howling winds, and you get the worst fires in California history. Now, heavy rain has fallen on the scorched land—without leaves to protect it, or living roots to hold it in place—leading to floods and mudslides.”

Wildfire Today is out with photos and video from the scene, along with astonishing rainfall reports from the vicinity of the Thomas Fire: more than a half-inch of rain in five minutes in Montecito, and nearly three-quarters of an inch in 10 minutes at KTYD Radio Towers in Santa Barbara