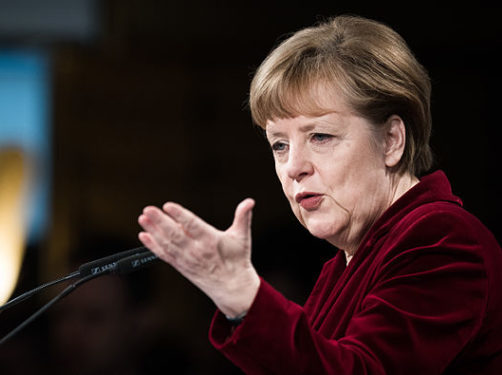 In a blow to German Chancellor Angela Merkel’s standing as a global climate leader, negotiators trying to keep her in power with coalition support have abandoned ambitions to reduce the country’s greenhouse gas emissions by 40% below 1990 levels by 2020.

Citing “sources familiar with negotiations,” Reuters reports that “negotiators for Merkel’s conservative bloc and the centre-left Social Democrats (SPD) had agreed in exploratory that the targeted cut in emissions could no longer be achieved by 2020.” The sources blamed “strong economic growth and higher-than-expected immigration.”

The agreement acknowledges as fact a forecast first reported last fall by Clean Energy Wire (CLEW), which found Germany falling “disastrously” short of its 2020 emissions target. “Without further action,” CLEW reported at the time, “Germany’s CO2 emissions will only be 31.7% to 32.5% below 1990 levels” by 2020.

A gap of that magnitude, stated an internal environment ministry analysis obtained at the time, would be “a disaster for Germany’s international reputation as a climate leader”.

It’s not Merkel’s first climate stand-down. Last year, Climate Home reported that her government had “dramatically weakened” the draft of a declaration to be adopted by G20 leaders meeting in Hamburg, in order to accommodate the climate denialist administration of the United States.

In fairness, the suspended target does not amount to a wholesale retreat from climate action. The parties agreed that Germany must “hit the 40% target in the early 2020s,” and achieve a 55% cut by 2030.

The parties also extended Germany’s current goal of sourcing 45 to 50% of its electrical energy from renewable origins by 2025, to 65% by 2030. The country got about a third of its power from renewables last year.

Both parties also hope to preserve a deal previously agreed to strike a national commission to “submit plans for an exit from coal-fired energy by the end of the year”.

“The agreement, worked out by energy experts from both sides, must still be approved by party leaders,” Reuters reports.