Louisiana Prepares Retreat from Its Own Coastline 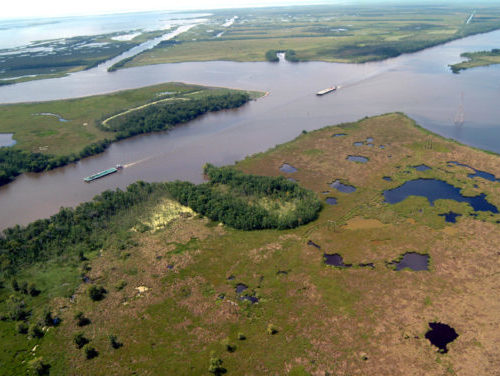 The state of Louisiana is planning the most dramatic exodus yet contemplated in the United States from the impacts of climate change. A draft plan proposes to abandon miles of coastline ravaged by rising sea levels, and by decades of damage to formerly protective mangrove forests and sea grass beds done by oil and gas development.

Louisiana’s plan, “the most aggressive response to climate-linked flooding in the U.S.,” contains both carrots and sticks to motivate thousands of people to leave a coastal area larger than the state of Delaware, Bloomberg reports.

It would prohibit new home construction in some zones, offer to buy out existing homeowners, and proposes “hikes in taxes on those who won’t leave”. While “commercial development would still be allowed, developers would need to put up bonds to pay for those buildings’ eventual demolition.”

The plan, backed by Louisiana Governor John Bel Edwards, reflects the state’s emerging acceptance of “an emotional, and terrible, reality,” remarked the official overseeing the plan, Mathew Sanders. “Not everybody is going to live where they are now and continue their way of life.”

The cost of the proposed buyouts and resettlement, Bloomberg estimates, “could add up to billions of dollars.”

Rising sea levels and encroaching coastlines are expected to transform America’s urban waterfronts in the decades ahead. As many as 670 U.S. coastal communities face regular flooding from the incoming seas by 2100.