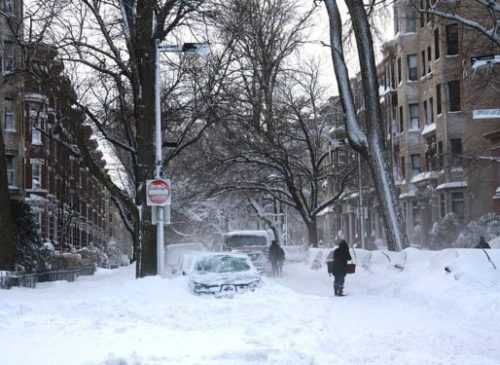 With a “weather bomb” blanketing much of North America’s east coast in heavy snow, high winds, coastal flooding, and deep cold, and forecasters expecting “eyelash-freezing” wind chill of -100°F/ -73.3°C on one New Hampshire mountain peak, InsideClimate News is out with the science behind an extreme weather episode that appears to be linked to climate change—Donald Trump tweets notwithstanding.

Severe cold has been a more common occurrence over the last four decades, even though the planet as a whole is warming. “While it may seem counterintuitive, the scientists believe these bitter cold snaps are connected to the warming of the Arctic and the effects that warming is having on the winds of the stratospheric polar vortex, high above the Earth’s surface,” InsideClimate explains.

“Here’s what scientists involved in the research think is happening: The evidence is clear that the Arctic has been warming faster than the rest of the planet. That warming is reducing the amount of Arctic sea ice, allowing more heat to escape from the ocean. The scientists think the ocean energy that is being released is causing a weakening of the polar vortex winds over the Arctic, which normally keep cold air centred over the polar region. That weakening is then allowing cold polar air to slip southward more often.”

The polar vortex itself is nothing new, and it has always varied in strength. But now, “the weaker phases are lasting longer and coinciding with cold winters in Northern Europe and Russia,” ICN notes.

“The shift toward more persistent weaker states of the polar vortex lets Arctic air spill out and threaten Russia and Europe with extreme cold,” said climate scientist Marlene Kretschmer of the Potsdam Institute for Climate Impact Research. “The trend can explain most of the cooling of Eurasian winters since 1990.”

Other scientists see a bigger role for factors like El Niño, which shifts sea surface temperatures, and changes in tropical regions. But Dörthe Handorf, an Alfred Wegener Institute climate researcher who wasn’t involved with the study, agreed stratospheric changes have an important impact.

“It’s a piece of the whole puzzle which really helps us understand the linkages between Arctic changes and mid-latitude circulation changes,” she told ICN. “Without the stratospheric changes, we can’t explain why we see an increase in cold days over Eurasia.”

While millions of people across Canada and the U.S. coped with the cold as best they could, the traditional electricity grid faced its own flurry of problems. In the U.S. Midwest, natural gas plants were having trouble securing supplies, Bloomberg reports. In New England, oil-fired power plants were beginning to run short of fuel, after being tapped for backup generation once the region hit the limit of its natural gas supplies. New England gas prices surged 60-fold, from US$2.93 to $175 per million British Thermal Units (BTUs). East coast oil refiners “were bracing for difficulties in the next few days,” Reuters reported Thursday, “though they have largely escaped major trouble thus far.”

The heavy weather also hit the 688-megawatt Pilgrim nuclear plant in Massachusetts, following the failure of one of the two power lines that connect the facility to the New England grid.

“The outage occurred during a winter storm that tested the power grid’s ability to keep the lights on as homes and businesses used most of the region’s natural gas supplies for heating, leaving less of the fuel available for power generation,” Reuters noted. “The lights did not go out in New England after Pilgrim shut because New England, like all U.S. power grids, keeps some generating plants in reserve in case an operating unit shuts unexpectedly.” But “the region, which usually gets about half of its power from gas-fired generators, was already receiving more electricity from oil-fired units instead of gas.”

The storm also appears to have triggered an “unusual event” at New Jersey’s Oyster Creek, the oldest operating nuclear plant in the U.S., where water intakes fell below required levels and power output had to be cut to 70%. The incident began Saturday morning and ended late Saturday night, reports the local Patch Network.

An “unusual event” is the lowest of the U.S. Nuclear Regulatory Commission’s four levels of emergency classification, Patch notes. Oyster Creek went into operation on December 2, 1969.

While North America gasped in the cold, a suburb of Sydney, Australia recorded its hottest summer temperature in eight decades, with a high temperature recorded at 117.14°F/47.3°C.

“On Friday, ahead of the heat wave predicted for the weekend, police in Victoria on Australia’s southeastern coast warned drivers that a six-mile stretch of a freeway in the central part of the state has melted,” the Washington Post reports. “A spokeswoman for VicRoads, which manages Victoria’s road systems, told the Australian Broadcasting Corporation that hot weather caused the asphalt to become ‘soft and sticky’ and the road surface to bleed.”

“This heat is a killer. It’s going to be like a blast furnace tomorrow, and you need to adjust what you do,” said Victoria ambulance commander Paul Holman. “You need to take care. So put off the sporting events, put off the outside events, stay inside.”